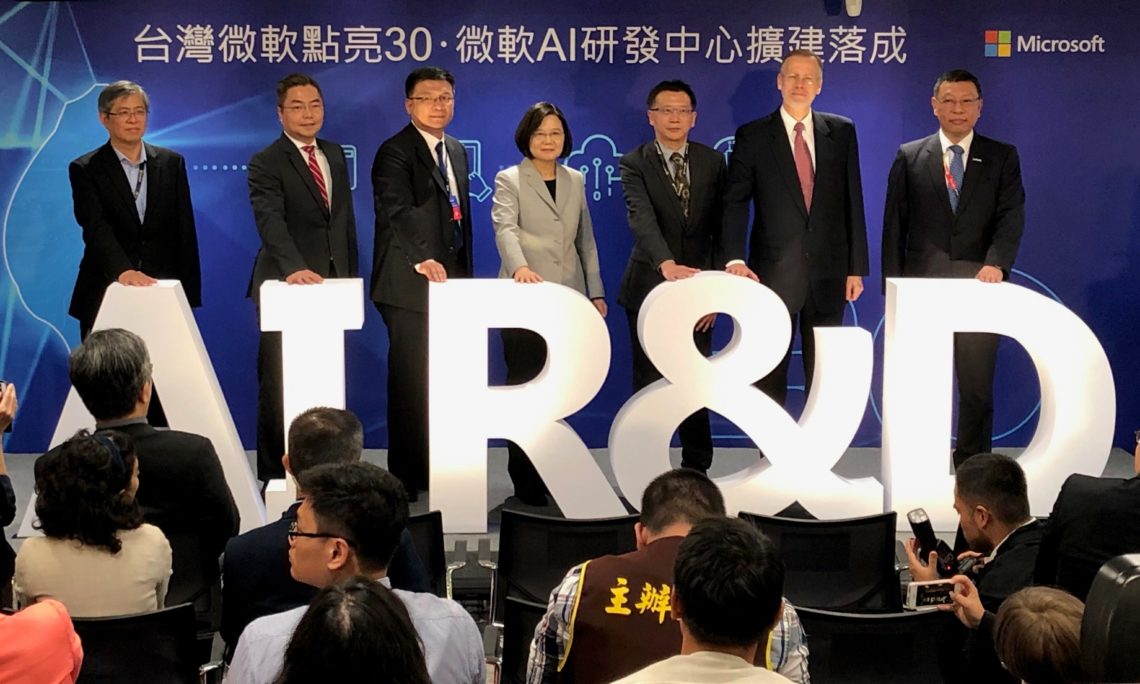 It is my great pleasure to be here today to help celebrate the grand opening of the newly expanded Microsoft AI Research and Development Center and Training Academy.  In many ways, this center is the quintessential example of the strength and the future of the U.S.-Taiwan technology relationship.  Let me try to provide some context for understanding why this is so.

For decades, technology cooperation has been at the core of the U.S.-Taiwan economic relationship.  Taiwan has been a critical link in global ICT supply chains, most notably in semiconductors, but also extending far beyond semiconductors to smart machinery, electronic components, biomedical devices, and computer manufacturing.

As you all know, technology is a central issue in the current U.S.-China trade tensions.  And the same is true for cross-strait economic challenges.  Taiwan is suffering an unprecedented assault on its technology industry.  Massive market-distorting subsidies give Chinese tech firms an unfair competitive advantage.  Widespread cyber theft of intellectual property and trade secrets enables Chinese firms to avoid expensive research and development costs.  And ploys like China’s 31 measures seek to lure Taiwan’s top talent to the mainland.  Governments must take aggressive action to limit the effects of these stratagems and to implement defensive measures.  But at the same time, as TSMC Founder Morris Chang has advised:  Taiwan’s best defense is to simply innovate faster.  This is a high stakes contest, and it is essential that government, industry, and civil society all work together to counter this threat.

Five years ago, the United States and Taiwan launched the Digital Economy Forum, or DEF.  The purpose of which was to help bring the U.S.-Taiwan relationship into the digital age.  Together with President Tsai’s ambitious 5+2 innovative industries policy, the goal of the DEF is to help facilitate Taiwan’s transition to a full-fledged innovation-based economy.  The heart of this effort is to unite cutting edge advances in artificial intelligence with Taiwan’s unparalleled prowess in hardware manufacturing to build the internet-of-everything future.

And this brings us to the key role Microsoft plays.  For decades, Microsoft has been at the forefront of the U.S.-Taiwan technology relationship.  Microsoft is one of the first — and remains one of the largest — software companies investing in Taiwan.  They have been an active partner for the last five years in quite literally all of the Digital Economy Forum-related initiatives, from the Symposium on Smart Cities and the Global Entrepreneurship Congresses to the Women’s Economic Empowerment Summits, and now, of course, to this AI Research and Development Center and Training Academy.

There are two facets of this center I want to highlight as it points to the future of our digital economy relationship.  First, is its focus on artificial intelligence.  Some experts argue that AI has the potential to be more disruptive than even the industrial revolution, fundamentally altering more than 90% of all work.  Some fear the possibility of mass joblessness and social upheaval.  Others express concerns that autocrats may seek to use AI as a powerful tool for suppressing the democratic aspirations and quashing human and religious rights.  But optimists hope that AI can usher in a new era when humanity can explore its deeper meanings and cultivate its artistic and social creativity.  These changes will come faster than any of us can imagine.  As Tesla CEO Elon Musk said, “AI will be the best or worst thing ever for humanity, so we need to get it right.”  Microsoft has been leading the way in devising ways in which AI can be used to solve human problems, bring society together, and become a powerful force for good.  And this center, under the leadership of Director General Michael Chang, is committed to that mission.

Second, is its emphasis on developing human capital.  Taiwan’s top universities produce thousands of world-class engineers every year, and increasingly they are specializing in AI programming.  The New York Times columnist Thomas Friedman once famously said Taiwan is his favorite economy in the world.  Why?  Precisely because it has so few natural resources, it has dedicated itself to “mining its 23 million people, their talent, energy, and intelligence.”  American firms have definitely taken notice.  Virtually every major U.S. technology firm has invested in AI R&D in Taiwan.  Collectively, their goal is simple:  to transform Taiwan into the world’s hub for AI R&D.  The supply chains of the future will not be just between suppliers and distributors, but rather between platforms and coders.  Taiwan promises to be the brain-power of the digital world.  This new AI R&D center will be the home for many of Microsoft’s efforts to enhance the AI and coding skills of Taiwan’s work-force.

Earlier this year, the United States and Taiwan jointly launched the Talent Circulation Alliance, or TCA.  The TCA is a public-private partnership that aims to facilitate the circulation of talent between Taiwan and the United States and other like-minded partners while cultivating the skills necessary for the digital age.  In today’s world, we can no longer afford to make a distinction between getting an education and working.  If we are to compete successfully, we must transition to a model of life-long learning.  We are very proud to count Microsoft and this center among our founding TCA partners.

And we have with us today a perfect example of how this talent circulation works in Corporate Vice President Kuo Yu-ting.  He studied in both Taiwan and the United States, rose through the ranks of Microsoft, and was then the driving force for Microsoft to open up this R&D center here in Taiwan.

We congratulate Microsoft on establishing this innovative new AI R&D center in Taiwan.  We have every confidence that Microsoft and this center will continue to lead the way into a future of ever-closer digital economy cooperation between the United States and Taiwan.  And for that, we are very grateful.

酈英傑處長今天在最近擴充規模的「微軟AI研發中心」開幕典禮上致詞。微軟在形塑美台科技關係的未來上一直處於領先地位，而這間研發中心正是「人才循環大聯盟計畫」的合作夥伴，代表私部門在促進人才培育和交流的絕佳典範。處長致詞稿全文：https://bit.ly/2n4PxZw #AI #Mictosoft Director Christensen gave remarks today at Microsoft’s newly expanded AI Research and Development Center and Training Academy. Microsoft is leading the way in shaping the future of the U.S.-Taiwan technology relationship and this center is a shining example of how the private sector can promote talent cultivation and circulation as a Talent Circulation Alliance (TCA) partner. Rㄎear DIR Remarks: https://bit.ly/2nKyw79