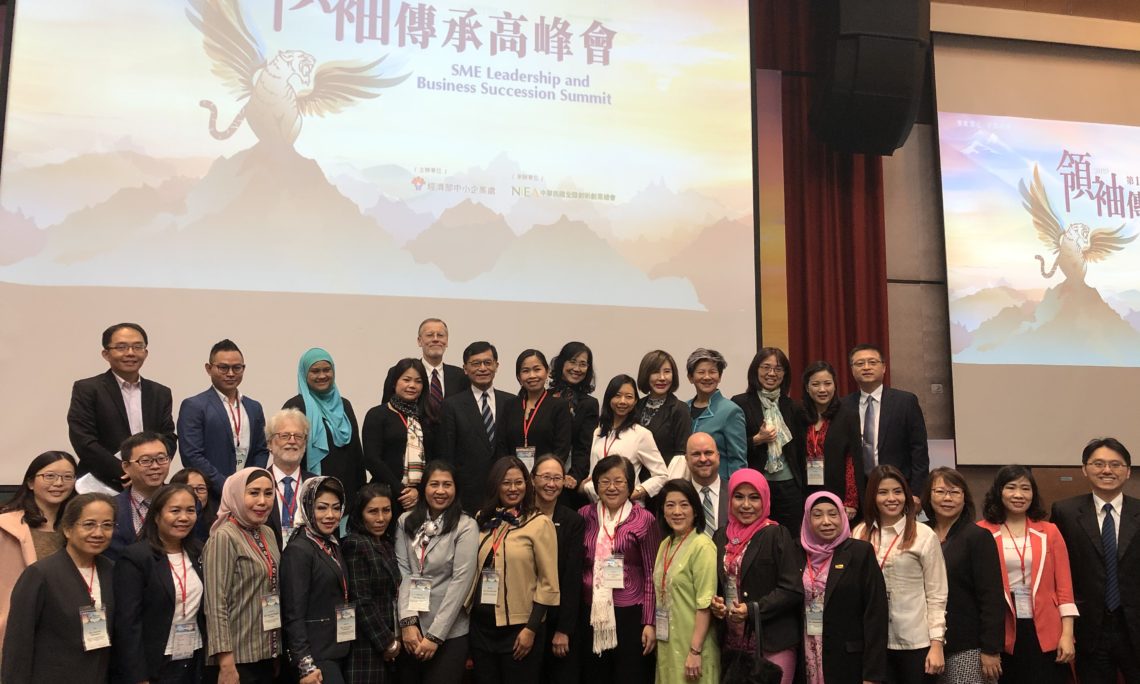 I’m very pleased to be here today to help kick off the 2019 Global Entrepreneurship Week, the 18th Annual SME Leadership Summit, and the first day of the study tour to Taiwan by more than twenty women entrepreneur mentors from ten ASEAN countries under our StartOpps program.

As many of you know, this year AIT is celebrating its 40th Anniversary and the 40th anniversary of the Taiwan Relations Act through our AIT@40 campaign.  Each month, we highlight a different aspect of the U.S.-Taiwan relationship.  November is Innovation and Entrepreneurship Month.  Two weeks ago, we kicked off the month with the 1st Annual Talent Circulation Summit, which brought together more than 1,200 leaders from government, industry, academia, and civil society around a common vision of cultivating an internationally-oriented workforce for the digital age.  Last week, the Port of San Diego was in town to explore with their counterparts how to transform ports into hubs of blue economy and circular economy innovation.

U.S.-Taiwan startup cooperation is robust.  For the last three years, we have been working together under the auspices of the U.S.-Taiwan SME Work Plan.  Earlier this year, in cooperation with the Small and Medium Enterprise Adminisration, we organized Taiwan’s first ever Women’s Economic Empowerment Summit, which was attended by more than 600 people from 20 countries throughout the region.  Next year, we look forward to working with them to expand opportunities for social entrepreneurs, women entrepreneurs, and to continue to integrate the startup ecosystems of the United States, Taiwan, and Southeast Asia.

As many of you know, every year the third week of November is Global Entrepreneurship Week.  This week, thousands of events and competitions in 170 countries will inspire millions to engage in entrepreneurial activity while connecting them to potential collaborators, mentors, and even investors.  Global Entrepreneurship Week is actually one part of a larger effort called the Global Entrepreneurship Network, or GEN, which hosts entrepreneurship oriented conferences, congresses, and Summits throughout the year.  GEN was started more than ten years ago by the U.S. State Department’s Office of Global Partnerships, but has since become a global network powered by the Kauffman Foundation.  GEN is supported by dozens of world leaders and has a network of more than 15,000 partner organizations.  The vision of GEN is clear:  integrate the startup ecosystems of the world to enable innovation to flourish.

At a Global Entrepreneurship Summit several years ago, the keynote speaker from the U.S. Government said, “when it comes to entrepreneurship, the job of government is to get the right people in the room, make sure there is enough coffee, and then get out of the way!”  In this spirit, throughout this week, the U.S. government and the Taiwan Authorities will be organizing a series of activities aimed at enhancing and promoting entrepreneurship.

First, of course, is we have worked together with the Taiwan Authorities to organize this 18th Annual SME Leadership Summit.  This Summit brings together some of Taiwan’s most successful entrepreneurs so that they can all learn from each other.  Let’s be blunt:  being an entrepreneur is by far one of the hardest things anybody can do.  By definition, all of you are doing things that have never been done before.  Entrepreneurs work insanely long hours against all odds, and persevere in the face of one obstacle after another.  That’s why entrepreneurs need each other.  Only fellow entrepreneurs understand the struggles of those trying to launch a new enterprise, and it is vital that the entrepreneurship community come together, support one another, and provide encouragement when it is needed most.  The SME Leadership Summit provides a forum where, year after year, Taiwan’s most successful entrepreneurs can do precisely that.  I’m pleased that the theme of this year’s Summit is “Mentorship.”  A strong, mutually supportive, mentorship community is the hidden glue of every innovation society.

Second, throughout this week, more than 20 women entrepreneur mentors from 10 ASEAN countries will be engaged in a study tour of how Taiwan’s startup ecosystem works to mentor and cultivate the next generation of women entrepreneurs.  Their study tour is part of our StartOpps program, which, like the Global Entrepreneurship Network, was launched by the Office of Global Partnerships.  The goal of StartOpps is to help integrate the U.S., Taiwan, and Southeast Asian startup communities together so that we effectively function as one giant innovative ecosystem, in particular for women.  Taiwan is a global leader on women’s empowerment – in government, academia, industry, and civil society.  It has a woman President, the highest women’s participation rate in parliament of any society in East Asia, and the highest rate of women founders of new startups.  During this week, the ASEAN mentors will spend two mornings at the SME Summit; meet with some of Taiwan’s most important startup ecosystem builders, such as Meet Taipei, AppWorks, and the Taiwan Tech Arena; and help launch an East Asia Role Model Network so women entrepreneurs from throughout the region can support one another and launch joint ventures together.  On Thursday, they will participate in the 1st Annual Talent Circulation Alliance Women’s Empowerment Expo, or W-Expo.  The W-Expo will feature about 40 of Taiwan’s most active and energetic women’s empowerment associations, showcasing all of the different activities they are doing, providing an opportunity for women leaders from Taiwan and Southeast Asia to network together, and inviting motivated individuals to join in their initiatives and become involved in the different associations.

Some of you might be asking yourself, why is the U.S. government so focused on promoting entrepreneurship in general, and women’s entrepreneurship in particular?  The answer is simple:  entrepreneurs represent the best of a free society.  Being an entrepreneur requires bringing together partners and resources in new ways in pursuit of a vision that sometimes only they see.  Most people just think entrepreneurs are crazy for even trying, and they often have to encounter multiple failures before they finally find that winning idea.  Entrepreneurship requires the freedom to take risks; the ability to think outside the box; and an educational, policy, and regulatory environment that encourages creative thinking.  By empowering entrepreneurs and helping them succeed, they naturally encourage governments, the private sector, and educational institutions to keep recreating the foundations of a free society – namely democratic governance, the rule of law, and the protection of intellectual property.  Entrepreneurs are, in many ways, the real driving force not only of innovation, but of the entire free and open Indo-Pacific.

In particular, the United States government views empowering women as the key to societal development.  Last year, we launched the Women’s Global Development and Prosperity, or W-GDP Initiative.  This large-scale effort is based on a very simple premise:  empowering women is critical not only to economic prosperity, but to global peace.  Research from the World Bank makes clear that the more women are excluded from the economy, the more likely that country will be involved in conflict and will respond to a threat with immediate violence.  But when women are empowered, they bring national stability.  It is for this reason that the United States National Security Strategy recognizes the critical role of women in achieving global peace and prosperity.  From our experience in the United States, and of course here in Taiwan, I can state unequivocally that empowering women is not just about social equality, it is also smart economics and smart geopolitics.

In closing, I would like to wish you all a great Global Entrepreneurship Week.  As I have tried to highlight, we view all of you as the future of not only the U.S.-Taiwan relationship, but of the free and open societies we hope to build together.  By connecting Taiwan’s best with their counterparts in ASEAN countries, our hope is this week builds bridges that last a lifetime.