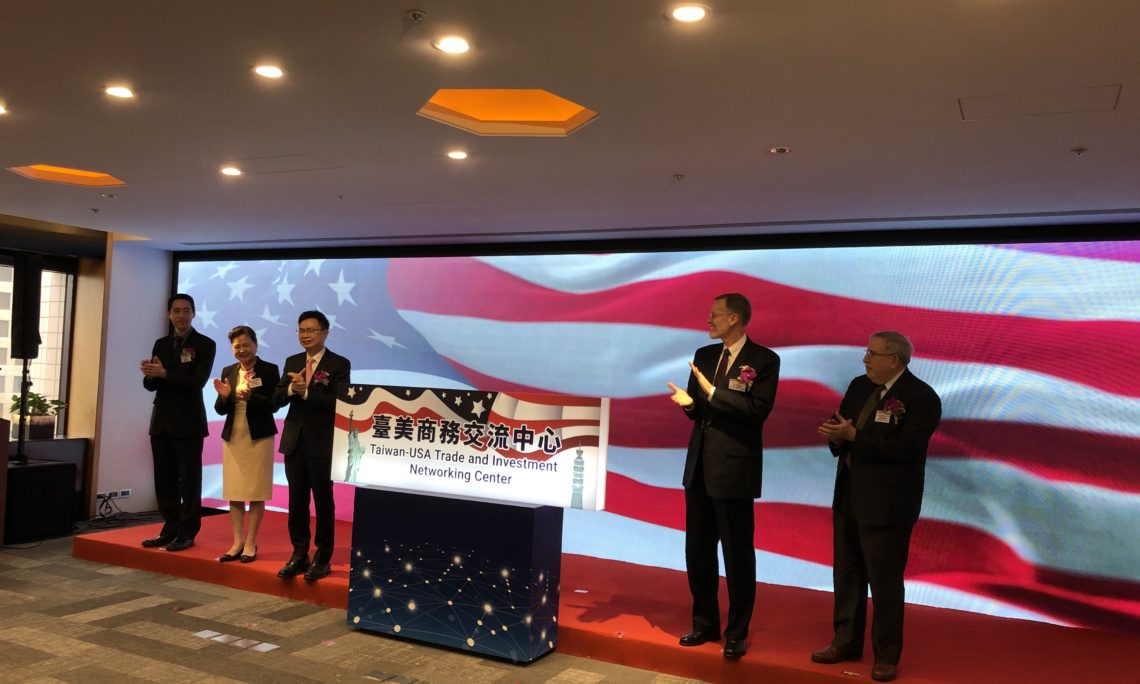 It is my honor to celebrate the opening of the Taiwan-USA Trade and Investment Networking Center. This Center is designed to be a one-stop, all-purpose platform to advise and assist Taiwan and American enterprises in expanding two-way trade and investment between the United States and Taiwan.

I would like to thank the Ministry of Economic Affairs’ Bureau of Foreign Trade, and TAITRA for their support and collaboration, and for making the vision of a Taiwan-USA Trade and Investment Networking Center come to life.

Further, I would like to thank the American State Offices Association, also known as ASOA, and AmCham Taipei for support in integrating resources from the public and private sectors at this new Center.

This year is the 40th anniversary of the establishment of the American Institute in Taiwan, and we will soon be concluding a yearlong campaign called AIT@40 to celebrate 40 years of friendship and partnership between the United States and Taiwan.

What better way to wrap up this year than through the establishment of this Taiwan-U.S. Center?

As part of the AIT@40 campaign, I have highlighted the “four promotes” outlining AIT’s priorities during my tenure.  Expanding economic and commercial ties is the second of these four promotes.

This Center is exactly the type of mechanism that we need to further expand U.S.-Taiwan economic ties.

And just last week, the Department of Commerce’s Assistant Secretary Ian Steff and Acting Deputy Assistant Secretary Laurie Farris were in Taipei focused on efforts to fuel bilateral economic growth and prosperity.  There is tremendous momentum in the relationship, and U.S.-Taiwan economic and commercial ties are stronger than ever.

This year, through the end of the third quarter, total two-way trade between Taiwan and the United States is up 13.6 percent, compared to the same period in 2018.

The United States is proud to be one of Taiwan’s top trading partners, and we expect that this new Center will be a linchpin in the continued expansion of our trade relationship.

Two-way investment between the United States and Taiwan is equally robust.

At the federal-level, the United States organizes a well-known annual investment conference in Washington, D.C. – the SelectUSA Investment Summit.

Frankly speaking, I consider the SelectUSA Summit to be the one of the best annual economic events organized by the U.S. federal government.

And I am proud to say that for two years running the Taiwan delegation to the SelectUSA Summit has been the largest from any economy worldwide.

This is particularly impressive considering that last year 79 economies sent delegations of firms interested in investing in the United States to the Summit.

Taiwan’s continuing strong participation in the Summit says a great deal about Taiwan’s firms’ positive view of doing business in the United States.

The 2020 SelectUSA Investment Summit will be held from June 1 to June 3, in Washington, D.C.  We plan to again organize spinoff events across the United States before and after the Summit.

I look forward to again personally participating in the 2020 Summit and hope to be joined by representatives from Taiwan ministries as well as another strong contingent from Taiwan’s private sector.

I believe that the establishment of the Taiwan-USA Trade and Investment Networking Center will play an important role to help promote the Investment Summit.

I am pleased to see several U.S. State office representatives here and know they will be deeply engaged in this new Center.  And these state offices are eager to discuss opportunities in their states and inform you about the resources they offer to Taiwan investors.

In closing, I would like to again applaud MOEA, TAITRA for establishing the Taiwan-USA Trade and Investment Networking Center.  We look forward to working with MOEA and TAITRA and with ASOA, AmCham and other partners at this new Center to deepen and expand trade and investment ties between the United States and Taiwan.   Thank you all for being here today.