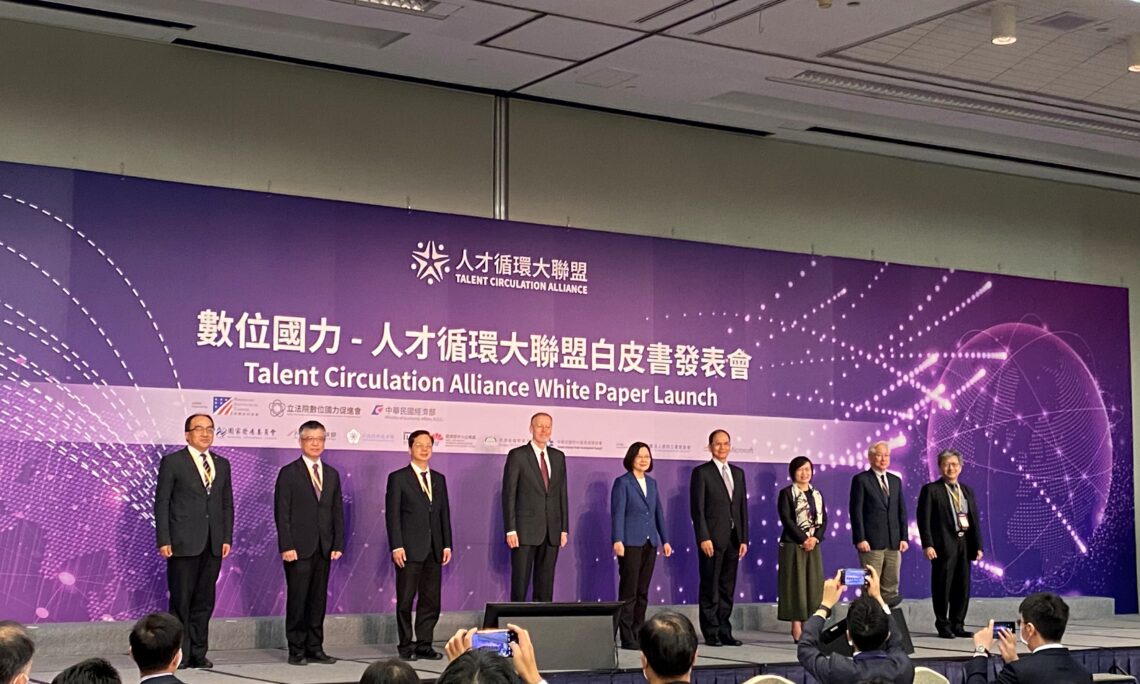 It is my distinct pleasure to be here today at the launch of the first annual Talent Circulation Alliance White Paper.  I am especially honored that President Tsai was able to find time in her intensely busy schedule to join us today.  Thank you, Madam President.

The Talent Circulation Alliance (TCA) is a public-private partnership, jointly founded last April by the American Institute in Taiwan and the Taiwan authorities, that facilitates the circulation of talent between Taiwan, the United States, and other like-minded partners, with the goal of cultivating a deep pool of capable, internationally-integrated, and digitally-savvy professionals.

The United States and Taiwan jointly created the TCA with four main goals:

First, the TCA aims to help recreate Taiwan’s economic success story for the digital age.  Many of Taiwan’s most successful leaders in industry, government, academia and civil society first gained experience abroad, primarily the United States, and then returned to Taiwan to make a positive difference.

Third, the TCA strives to grow Taiwan’s most important resource – its talent.  Economies that adhere to international economic norms and rely on private-sector-led, inclusive, sustainable growth rely on talent to succeed.

Finally, the TCA seeks to prevent brain drain.  The best way to prevent the loss of talent is to create a viable alternative – namely easy circulation of talent among like-minded economies, in particular the United States.

In short, from our perspective, having sufficient talent is a pre-requisite for accomplishing all of Taiwan’s policy goals.  Solving this one problem – how to cultivate and manage Taiwan’s talent – will, in turn, help solve virtually all the other challenges Taiwan faces.

What does the Talent Circulation Alliance Do?

The TCA amplifies the activities of organizations who are driving talent circulation today by providing support, partnership-building, and advocacy for our partners.  Specifically, the TCA has three main lines of effort:  Talent exchange programs, talent cultivation seminars, and talent networking opportunities.

Since the Talent Circulation Alliance’s launch, AIT, the Ministry of Economic Affairs’ Industrial Development Bureau, and the Institute for the Information Industry have been working hard to organize a wide variety of major events promoting talent circulation.

Last year with III and the Association for Talent Development, the TCA held the first annual Talent Circulation Summit which featured Vice President Chen and TSMC Founder Morris Chang.  Working with All Hands Taiwan, the TCA organized the largest ever international job fair, bringing together close to 1,500 of Taiwan’s top international talent.  With the National Development Council and the Small and Medium Enterprise Administration, the TCA put on an International Women’s Empowerment Expo, bringing representatives from more than ten countries from around the region.

For its part, AIT is working hard to expand our talent circulation and cultivation programs.  As part of this, Fulbright Taiwan facilitates the exchange of more than 200 students, teachers, and scholars every year.  AIT likewise send more than thirty up and coming leaders to the United States every year on our International Visitors Leadership Program, and the Department of State sponsors pioneers from Taiwan’s startup community to attend the Global Entrepreneurship Summit.  Thanks to the work of Education USA, more than 23,000 Taiwan students every year attend U.S. universities.  We also have organized over the last couple of years more than a dozen public events through our Digital Economy Speakers’ program bringing in top thought leaders from the United States, such as UCLA’s Chancellor, Uber’s Chief Operating Officer, Dun & Bradstreet’s Chief Data Scientist, and more to share their perspective on international trends.

The U.S. private sector has also stepped up to help promote talent circulation.  Microsoft and TAITRA have joined forces to help train 2nd generation CEOs on how to digitally upgrade their businesses.  The American Chamber of Commerce has launched its NextGen Leaders’ Program.  Micron is hiring thousands of new engineers to support its investment in Taiwan under the banner of “connecting Taiwan to the world.”

The TCA wouldn’t exist without the support of the Taiwan Authorities.  The Industrial Development Bureau was a co-founding partner and provided funding for the TCA Secretariat.  The TCA hopes to organize study tours to the United States for Taiwan’s industry and inbound and outbound internship programs to enable the free circulation of startup talent.  The Ministry of Science and Technology’s LIFT, LEAP, and GLORIA programs are already enabling technology talent circulation between the United States and Taiwan.

Talent circulation is an issue that has the power to unite the public and private sector in the United States, Taiwan, and our other like-minded partners.

Over the last 12 months, AIT and partners helped the TCA collect input from industry leaders, academics, government officials, foreign missions, civil society, and the general public through conferences, roundtables, meetings, and on-line digital dialogues.  All of this input has been consolidated together into actionable policy steps outlined in the TCA White Paper, published as part of the American Chamber of Commerce’s annual White Paper.  The main conclusion the TCA reached is that Taiwan needs to transform itself into an “international talent hub.”  They said, “Taiwan has few natural resources, but it has an abundance of talented people. If the people of Taiwan are equipped with the necessary skills and then connected to the world, Taiwan will naturally succeed and be able to chart its own future for decades to come.”

In conclusion, AIT is delighted to be a founding partner of the Talent Circulation Alliance and would like to congratulate the Alliance on putting together the first of what will become an annual White Paper.  In close partnership with President Tsai’s administration, the Legislative Yuan, and our private sector and civil society partners, AIT stands ready to enthusiastically support Taiwan in realizing its vision to become an international talent hub.