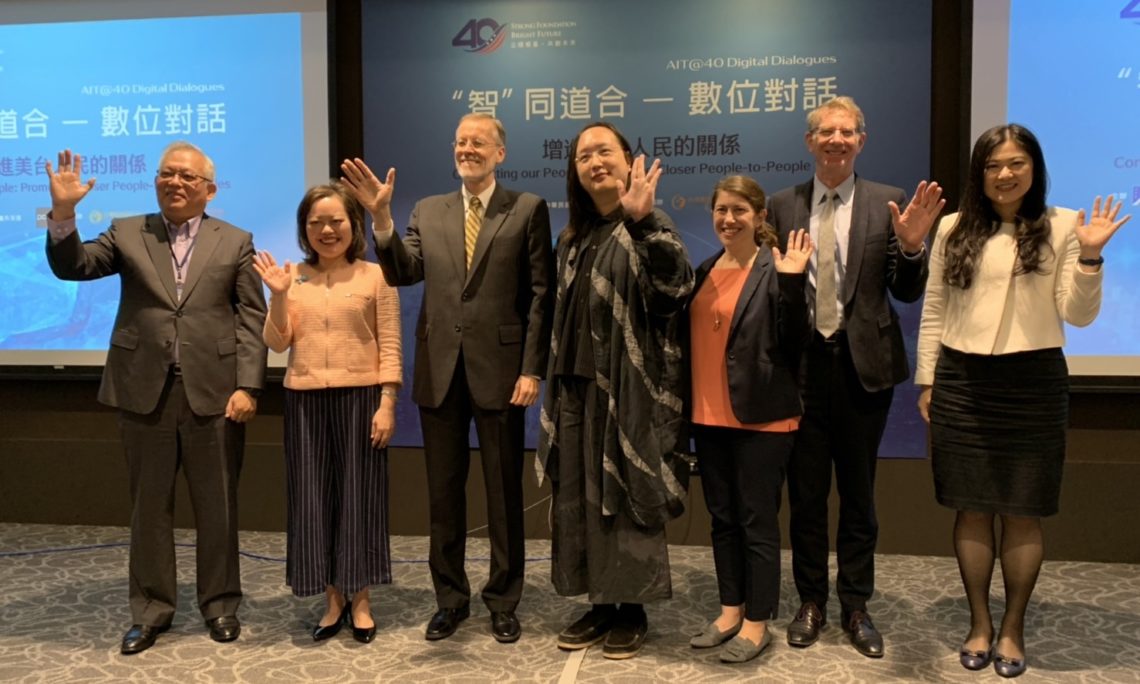 Good afternoon!  Wu an! Welcome to the fourth and final Digital Dialogue Public Forum and the final event of our yearlong AIT@40 campaign.

Before I begin, I would like to once again congratulate Taiwan on Saturday’s election.  I echo Secretary of State Pompeo’s words of congratulations to President Tsai and hope that Taiwan will continue to serve as a shining example for countries that strive for democracy, prosperity, and a better path for their people.

Today I want to talk about our accomplishments over the past year; say a few words about the fourth Digital Dialogue theme: people-to-people ties; and provide a preview of our vision and activities for 2020.

2019 marked the 40th anniversary of the Taiwan Relations Act and AIT’s 40th birthday.  Anniversaries are a time to reflect on how we have changed and grown.  They are also an opportunity to recommit ourselves to the pursuits that have enriched our lives and expanded our possibilities.

In this spirit, we spent this year not only celebrating 40 years of U.S.-Taiwan friendship, but also examining the many ways this partnership has benefitted both our societies and how we might expand our partnership for future generations.

There was a lot to celebrate and a lot to examine!  Each month, we focused on a different theme, from Arts & Culture to Security Cooperation; Digital Economy to the Environment; Shared Values to Innovation & Entrepreneurship.  We held conferences and workshops; shared stories on social media; opened museum exhibitions; and organized student exchanges.  We held our first-ever U.S.-Taiwan Consultations on Democratic Governance; launched our Digital Dialogue series; and lit up the night sky with an AIT@40 message across the side of Taipei 101.

This was truly an extraordinary year, packed with activities that engaged the highest levels of government, the youngest members of our communities, and everyone in between.  And even after all that, there is so much more to celebrate that we joked about launching an AIT@41 campaign.

On security cooperation, the U.S. notified more than 10 billion U.S. dollars in sales of defense articles to Taiwan, including F16 fighter jets and M1 tanks, part of our continuing effort to fulfill our commitment in the TRA to support Taiwan’s self-defense.  We also launched the Indo-Pacific Security Fellowship, designed to cultivate a future generation of leadership for the bilateral security relationship and plant the seeds for enhanced U.S.-Taiwan security cooperation for the coming decade.

On economic and commercial ties, we held the third Digital Economy Forum, in which U.S. and Taiwan representatives identified ways to enhance our cooperation on critical tech issues such as 5G, AI, and digital trade.  We also held the Women’s Economic Empowerment Summit, which connected young women in Taiwan with female business leaders from across the Indo-Pacific, including representatives from some of the United States’ most successful companies: Microsoft, Bloomberg, Facebook, and Uber, just to name a few.  In June, for the second year in a row, Taiwan sent the largest delegation worldwide to the annual SelectUSA investment summit in Washington, DC, which further strengthened our bilateral economic ties.

On Taiwan’s global engagement, we worked with Taiwan’s leadership to host the first ever Civil Society Dialogue on Securing Religious Freedom in the Indo-Pacific Region, which brought together members of civil society from over 18 countries here in Taipei to forge solutions to the growing trend of religious repression.  And in October, the United States and Taiwan cohosted the first Pacific Islands Dialogue, where Pacific Island nations could learn from Taiwan’s successes in achieving sustainable, inclusive economic growth.

Finally, on people-to-people ties, we introduced the Talent Circulation Alliance, designated 2019 as a U.S.-Taiwan Travel Year to increase two-way travel between the United States and Taiwan, and announced an effort to establish preclearance operations at Taoyuan Airport, which will make travel to the United States even easier.  In addition, in October, we helped launch the first Flagship Chinese language program in Taiwan at the National Taiwan University.

And that brings me to the topic of today’s Digital Dialogue Public Forum: strengthening people-to-people ties between the United States and Taiwan.  It would be easy to say that this is an area in which we have already enjoyed so much success that we no longer need to make it our focus.  Generations of Taiwan’s most prominent political leaders, successful businesspeople, and influential cultural icons have spent time in the United States.  Taiwan sends roughly the same number of students to the United States as Mexico and Germany combined.  And last year, two-way travel hit a historic high, surpassing a million travelers.

These ties also form the connective tissue that allows the United States and Taiwan to cooperate in ways that have immeasurably benefitted both of our societies and the entire global community.  These ties allow us to confront new challenges head-on and side-by-side.  And these ties are the inspiration for AIT’s theme for 2020: Real Friends, Real Progress 真朋友，真進展.

Perhaps this concept sounds very simple, but it is important to consider its significance within the current context.  Some use the cover of friendship to dominate and manipulate; promising mutual benefit but instead delivering extortion; exporting problems rather than solutions.

The United States and Taiwan, and the friendship we have built over the past forty years, stand in stark contrast to the cynical opportunism I just described. We do not define our interests solely in terms of dollar signs or how well they conform to global trends or views of the day.  Instead, the United States and Taiwan are sincerely invested in each other’s successes and in forging a shared future together 真朋友，真進展.

This shared future means that we strive together and thrive together 共同努力，共同得益.  The United States and Taiwan are capable partners with societies and economies uniquely equipped to drive global progress and tackle emerging threats.  Furthermore, we are natural partners in promoting a free and open Indo-Pacific.

And our partnership is built not on the coincidence of common geography or race, but rather on something fundamental: we share a common character 相同本質.  This character is exemplified by our shared values:

Our political values 政治價值觀, which include our dedication to rule of law, protection of human rights and freedoms, and appreciation of diversity.

Our economic values 經濟價值觀, which include our commitment to free markets, private sector-driven growth, protection of intellectual property rights, and adherence to international trade rules.

Our international values 國際價值觀, which include contributing to global problem-solving, generosity with foreign assistance and humanitarian relief, and working to lift up countries around the world as they strive towards greater prosperity and more democratic systems of governance.

The United States and Taiwan are members of the same family of democracies, bonded by these common values.  In the coming year, we will work in concert with Taiwan and the other members of this family to fortify these real friendships and together pursue real progress.

We will expand the Global Training and Cooperation Framework (or GCTF), a platform we founded in 2015 to bring Taiwan’s expertise and leadership to the global stage.  In 2020, we plan to hold a record 11 workshops.  Each of these workshops will be cohosted not only by Japan, our new trilateral partner, but also by a rotating fourth co-host.  Our first workshop of the year, on sustainable materials management, will be cohosted by the Netherlands and will focus on solutions to the global marine debris challenge. We also plan to host workshops outside of Taiwan, including in one of Taiwan’s diplomatic partner nations; these workshops will provide a platform for Taiwan to share best practices and expertise, while highlighting the many benefits of strengthening partnerships with Taiwan, official or unofficial.

The year 2020 will also feature a series of events promoting our newly-launched Talent Circulation Alliance, or TCA.  The Talent Circulation Alliance was born from the idea that the 21st century solution to brain drain is not talent retention; it is talent circulation.  In an increasingly globalized world where careers look less like ladders and more like jungle gyms, economies thrive when they encourage their best and brightest to gain experience abroad.  The United States has long been the destination of choice for scholars and experts in all disciplines to sharpen their skills before returning home to become leaders and drivers of growth and progress.  The TCA currently features more than 20 programs aimed at facilitating talent exchange, talent cultivation, and talent networking opportunities between Taiwan, the United States, and other like-minded countries.  While China is seeking to poach Taiwan’s talent, the United States is helping Taiwan internationalize its workforce for the digital age through talent circulation.

AIT is also organizing complementary programs aimed at building STEM capacity among Taiwan’s youth and young professionals, including expert visits and exchanges on cybersecurity and a tech camp for girls.  Stay tuned for more information for these and many other exciting programs in 2020.

Before I conclude I would like to thank all of the people who made AIT@40 and the Digital Dialogues a success: Thank you to Foreign Minister Wu and our colleagues at the Foreign Ministry for your partnership.  Thanks to our counterparts at TECRO in Washington, whose TRA@40 programming helped educate Americans about the value of the U.S.-Taiwan friendship.  Thanks to partners from ministries across Taiwan’s government and to the many private partners who supported the many programs and activities that comprised AIT@40.  And I would like to give a very special thanks to Digital Minister Audrey Tang and her team.  She is without a doubt the global trailblazer when it comes to finding ways to digitally democratize not only domestic government, but international affairs.  She not only developed the tools which made the Digital Dialogues possible, but personally guided the process.

As the United States and Taiwan look back on the past 40 years, we can see clearly that our journey together not only exemplifies mutual benefit, but also convergence.  We have converged on a commitment to democratic governance; we have converged on an economic model that views human capital as the most valuable of all; and we have converged on an international posture of striving to be a force for good in the world.  To me, this convergence demonstrates that sometimes we are not defined by where we are born but rather by the values we choose to live by.  I look forward to seeing what the United States, Taiwan, and the world family of democracies will accomplish in the year to come.