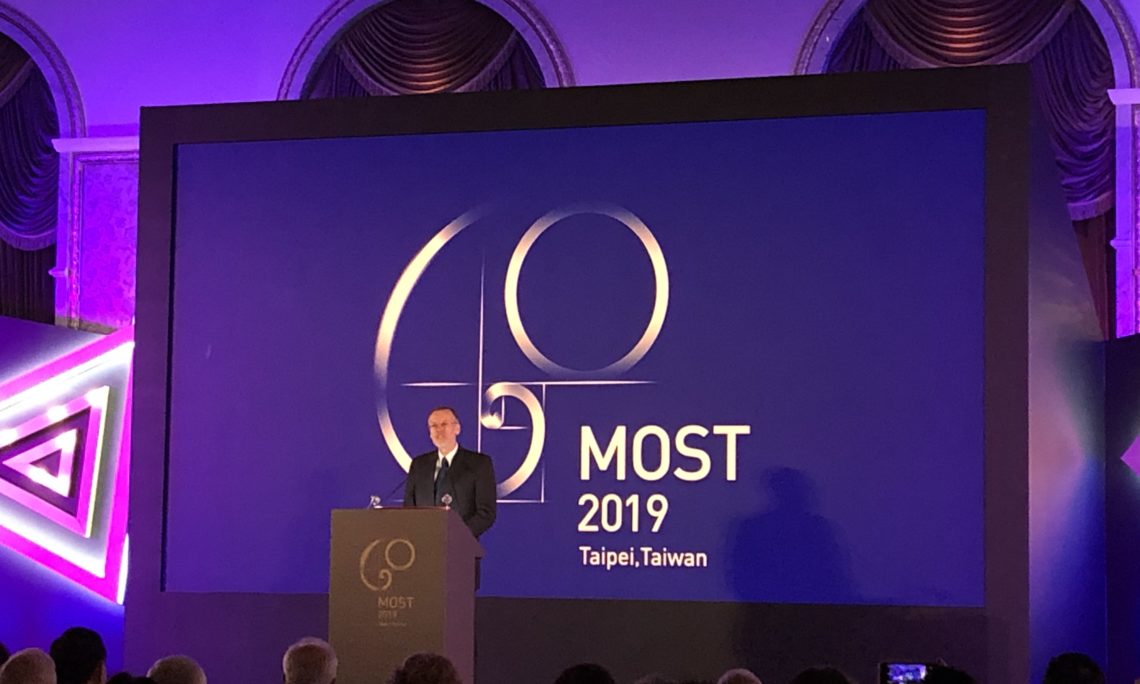 It is my great pleasure to be here today to help open this Forum and to celebrate the Ministry of Science and Technology’s 60th Anniversary.  Over the last six decades, Taiwan has gone from a largely agrarian society to a global technology powerhouse.  This radical transformation has come about largely due to the forward-looking leadership in the Ministry of Science and Technology and its predecessors, the National Council on Science Development and the National Science Council.  Without this inspired leadership, Taiwan might not be the free, open, and modern society it is today.

This year, AIT is celebrating its 40th Anniversary through our AIT@40 campaign.  Each month, we have highlighted a different aspect of the U.S.-Taiwan relationship.  Just to show how central science and technology are to our relationship, five of our twelve themes of the year relate to work we do with the Ministry of Science and Technology:  February looked at our science cooperation, April focused on trade and investment of which high-tech electronics are central, June focused on technology and the digital economy, November is about innovation and entrepreneurship, and December will look at our scientific cooperation on the environment.

For decades, Taiwan has been a critical link in global technology supply chains.  Taiwan is home to some of the world’s most advanced semiconductor and electronic component manufacturers, a deep pool of world-class engineers, highly adaptive technology support services, innovative startups, and strong intellectual property protections grounded in the rule of law.  Taiwan follows the international rules of the road and is rapidly making the transition to an innovation-based economy.  Indeed, the World Economic Forum concluded last year that Taiwan has emerged as one of the world’s top four “super-innovators.”

But it is not enough for us to simply celebrate the successes we have already enjoyed.  As we build together this new digital age, it is vital that we ensure that our science and technology relationship grows even closer over the next 60 years as well.

The crux of the matter is quite simple:  where does the technology industry see its future?  If the answer is in China, then that is where the investment money and talent will flow.  If the answer is the United States, Taiwan and other like-minded partners then the investment and talent will flow there instead.  The challenges we face are substantial.  China’s use of unprecedented market-distorting subsidies, widespread intellectual property theft, and predatory poaching of technology talent represent a serious threat to the rules-based economic order.  As societies committed to the shared values of democracy and open economies, it is our collective responsibility to defend the rules-based order against those who would seek to subvert it.  Deepening our technology cooperation will be central to that effort.

In this light, I would like to offer three observations on how we can further strengthen our technology relationship.

First, both the public and private sector must actively promote cross-border technology investment.  We are particularly pleased to see high-tech investment increasing rapidly between the U.S. and Taiwan.  This year at the annual SelectUSA Investment Summit, for the second year in a row, Taiwan had the largest delegation in attendance.  Equally worth noting, many of the United States’ top technology firms – including Corning, Qualcomm, Microsoft, Google, and Facebook, to name just a few – are all ramping up their investments and their presence here in Taiwan, especially in artificial intelligence.  Micron is by a significant margin Taiwan’s largest foreign investor and has become one of Taiwan’s most important technology companies.  Supply chains are rapidly moving out of China and towards India, Southeast Asia, and back to Taiwan.  New investments ensure that that United States’ and Taiwan’s technology future remains firmly tied together.  I will be attending the Indo-Pacific Business Forum in Bangkok next week, where all of our Indo-Pacific partners, including Taiwan, will come together to deepen our commercial and economic ties, and to reaffirm our shared commitment to a free and open Indo-Pacific.

Second, we must deepen academia-industry-research collaboration.  The secret sauce of U.S. innovation is close collaboration between academia, industry, and research institutions.  Today, the top-tier U.S. universities are reimagining themselves as startup incubators.  Virtually all innovation clusters in the United States emerged out of anchor Universities.  Silicon Valley largely emerged out of Stanford.  The Research Triangle in North Carolina grew out of Duke, North Carolina State, and the University of North Carolina at Chapel Hill.  Austin’s technological renaissance arose from U.T. Austin.  And the list goes on.  These universities now measure their success not by how many articles they publish in journals, but rather by how many startups they launch.  They view the people in their classrooms not as students, but as the future founders of innovative companies.  Business schools and engineering programs are coming out of their silos and merging through offering joint programs, especially in areas like AI programming.  Thanks to the leadership of the Ministry of Science and Technology, we are beginning to see similar developments here in Taiwan.  To forge closer cooperation, we need to actively build closer ties between the U.S. and Taiwan innovation clusters.

Third, we must work towards the free circulation of technology talent among all like-minded economies, in both academic and professional environments.  Most of Taiwan’s technology industry was established by people who studied in the United States and came back to found what are now some of Taiwan’s most successful companies.  This is especially true in the semiconductor industry.  When Taiwan’s talent studies or works in the United States, they return equipped not only with the skills and vision to succeed in Taiwan, but also the personal connections that form the glue of U.S.-Taiwan technology cooperation.  AppWorks Founder Jamie Lin, one of the most successful examples of his generation, said that when he was in the United States he saw Taiwan’s future, and he then returned to make it happen.  There is no reason why Taiwan cannot become a hub for high-tech education in the Indo-Pacific.  If Taiwan offered high-quality, innovation-based education – in English – people would come from all over the world.  This would not only be a boon for Taiwan’s universities, but it would also build the educational and cultural connections between Taiwan and like-minded partners that would pay dividends for decades to come.

As many of you know, the United States and Taiwan recently launched a major new initiative called the Talent Circulation Alliance, or TCA.  It seeks to facilitate not only educational exchange between Taiwan and its partners around the world, but also professional exchanges, such as internships and professional secondments.  The TCA seeks a complete paradigm shift in how we think about educational exchange – we must move towards a “life-long-learning model” where international education exchange is the heart of the beginning, middle, and end of a person’s career.  Next Tuesday, we will be jointly organizing with the Taiwan authorities a large-scale Talent Circulation Summit to explore new opportunities for international talent exchange and training.

If there is one thing my long experience with Taiwan has taught me, it is to never under-estimate Taiwan’s innovative and entrepreneurial spirit.  Looking back on the many years of U.S.-Taiwan technology cooperation, and looking forward to all that is to come, I have every confidence that the work of the Ministry of Science and Technology will continue to be essential to Taiwan’s future success.  We look forward to the marvelous journey to come.