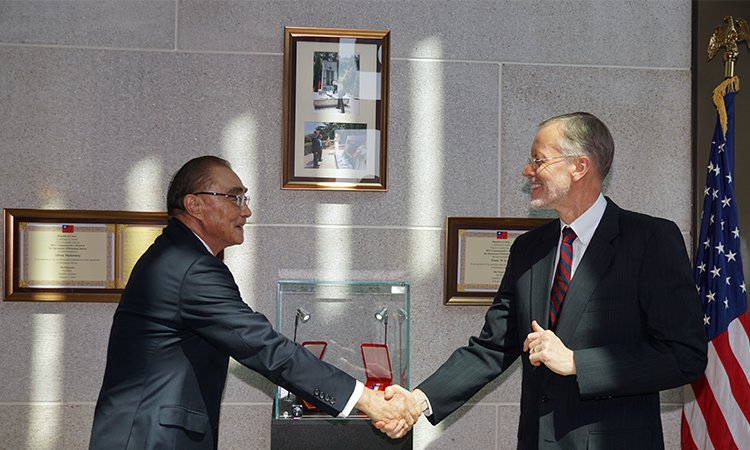 Veterans Affairs Council Minister Feng, Deputy Minister of National Defense Vice Admiral Lee, Legislator Lo, Institute for National Defense and Security Research (INDSR) Chairman Huoh, INDSR Chief Executive Officer Lin, distinguished guests, ladies and gentlemen, welcome to today’s ceremony.  We are pleased to host you here at AIT as we come together to unveil this important addition to our lobby.  It’s been a little over a year since we moved to this new facility, and anytime you move to a new place – no matter how beautiful or how modern – there is an adjustment period.  Part of our process for making this new facility feel like home is filling it with meaningful images and objects that reaffirm our core values.  I cannot think of a better example than this new memorial.

When we discuss our security relationship with Taiwan, we tend to focus on arms sales; but it is the people-to-people ties that are the real foundation of our security relationship. Going back to the World War II era, we have legendary figures like General Joseph Stilwell, who commanded the China-Burma-India theater, and General Claire Chennault, who led the Flying Tigers, the 80th anniversary of which we look forward to celebrating next year.

Our relationships continued following the conclusion of World War II and in 1951, the Military Assistance Advisory Group was established. Not long after, the United States Taiwan Defense Command was stood up following the first Taiwan Strait crisis. At its peak, the United States Taiwan Defense Command and the Military Assistance Advisory Group commanded a combined 30,000 service members. Many of those troops brought families with them to live in Taiwan and forged some of the people-to-people ties that have long served as the backbone of our partnership. Both Taiwan and U.S. veterans and descendants of these veterans still maintain close ties and often meet to keep the memory and history of this cooperation alive.

Which brings us to today.

But beyond the sacrifices of these two brave men, these medals, this flag, and this memorial are intended to honor all U.S. personnel – past, present, and future – who participated – or will participate — in the U.S.-Taiwan strategic partnership to support Taiwan’s self-defense.

Many of today’s threats are different than the ones these brave men confronted.  We face dangerous new technologies, a deadly pandemic and the unpredictable effects of climate change.  But our partnership, rooted in tradition, continues to exemplify the mutual support, mutual respect, and mutual interests that these service members and their cohort helped to build between our societies and between our militaries.

Our close friendship also means that when Taiwan suffers the loss of valued comrades, as they have this year, we feel those losses as though they were our own.  But as we grieve together, we also feel a renewed sense of commitment and purpose.

With each new project or endeavor, the U.S.-Taiwan security partnership builds on our decades-long history.  This is a history worth remembering and it up to us to ensure that it is not forgotten.  Likewise, we share a responsibility to ensure that our veterans enjoy the recognition and respect they deserve from the societies they risked their lives to protect.  I commend the Veterans Affairs Council for its tireless effort to support veterans, and I look forward to further expanding our bilateral cooperation in this effort.

I will close by saying that this new memorial is an important reminder to all of us at AIT of the greater mission we serve and support.  And for visitors to AIT, it will also draw their attention to our rich shared history in war and in peace.