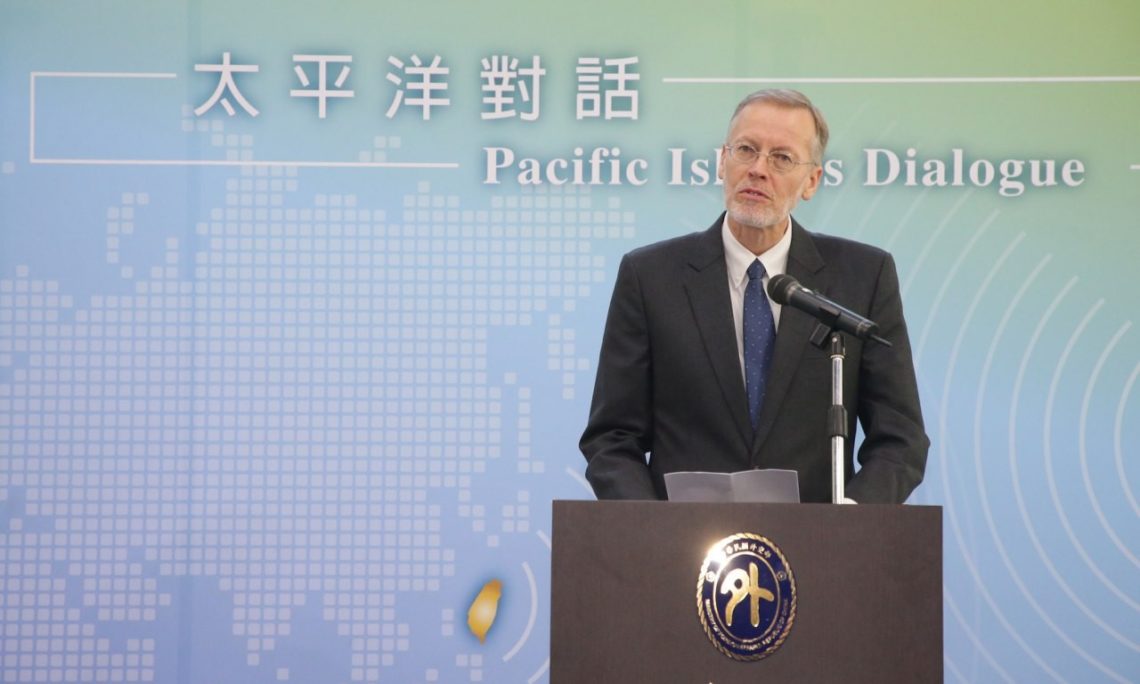 Foreign Minister Wu, Deputy Assistant Secretary Oudkirk, Ambassadors and Representatives, distinguished guests and friends, good morning.  On behalf of the American Institute in Taiwan, it is my honor and pleasure to welcome you all to the first U.S.-Taiwan Pacific Islands Dialogue.

The United States is a Pacific nation with deep and long-standing ties to the region. Our vision for the Indo-Pacific is an affirmation of our commitment to protect free markets, cultivate good governance, and enhance regional stability through partnerships across the Indo-Pacific. We work with the Pacific Islands to tackle a variety of challenges, including promoting sustainable growth and prosperity, addressing environmental challenges, and strengthening people-to-people ties.

The United States and Taiwan, as members of the Indo-Pacific community, share a strong desire for a free and open Indo-Pacific.  We also share an interest in supporting the island nations of the Pacific in meeting their development goals.  This dialogue is intended to identify areas where the United States, Taiwan, and likeminded partners can cooperate to meet the needs of our friends in the Pacific.  Today’s discussions are the beginning of what we hope will be a longer conversation about how to better leverage resources to deliver critical improvements to health, infrastructure, and economic opportunity.

During the U.S.-Taiwan Democratic Governance Consultations which took place in September, I described Taiwan as a shining example of the good governance we hope to see realized across the Indo-Pacific region.  Taiwan demonstrates through its actions the belief that increased transparency and greater respect for the rule of law are the foundation upon which a free, open, and prosperous Indo-Pacific can be built.  As we have seen through the joint efforts of the United States and Taiwan in the Global Cooperation and Training Framework – or GCTF — Taiwan is a generous donor and a model partner for the United States and for other likeminded countries in advancing our common objectives in the region.

The Pacific Island Leadership Program, founded in 2013 with the support of the U.S. East-West Center in Hawaii, is yet another impressive U.S.-Taiwan regional initiative.  Designed to build leadership capacity in the Pacific, this program invites promising early and mid-career executives from around the region to participate in a ten-week program that includes in-residence training in both Hawaii and Taiwan.  In fact, the sixth cohort of program participants is at the East-West Center right now in the first phase of this year’s program.  Thus far, 122 professionals have graduated from the program and are now applying the valuable skills they learned as leaders in the fields of government, business and civil society.

Taiwan’s ethnic and cultural ties make it a natural partner for the Pacific island nations.  As Ambassador Amy Hyatt, our ambassador to Palau, pointed out last week at the GCTF Austronesian Languages Revitalization Forum in Koror, the Polynesian peoples share close cultural and linguistic links with Taiwan.  Taiwan has emerged as a leader in this language preservation effort, with the 2017 passage of its Indigenous Languages Development Act and its generous contribution to fund the 2018 re-establishment of the Austronesian Forum, which convenes annually to promote the cultural, economic, political and social development of indigenous populations in the Indo-Pacific.  This initiative to preserve the cultural roots of the Pacific is indicative of Taiwan’s affinity for and good will towards the people of the Pacific.

Taiwan has much to offer the global community and especially the Indo-Pacific region, as one can see from the many GCTF programs we have co-sponsored since the GCTF was established over four years ago in 2015 – in public health, law enforcement, anti-corruption, women’s empowerment, humanitarian assistance and disaster relief and more.  Public health is one area in which Taiwan has an especially impressive competency.  Taiwan spends about half of what most developed countries spend on health care per capita, yet it has comparable longevity and other health indicators.  In the Pacific, Taiwan has shared its health care expertise through medical cooperation projects in Fiji, the Marshall Islands, Nauru, Palau, Papua New Guinea, and Tuvalu.  Under the GCTF, the United States and Taiwan have teamed up to put on special training workshops on Dengue fever, MERS, Zika and multi-drug resistant tuberculosis.  We were very pleased to have Japan join the GCTF as a co-sponsor this year.

When disaster strikes, Taiwan has also shown itself to be a generous friend and neighbor.  Following the Fukushima disaster in 2011, Taiwan quickly mobilized rescue teams and ended up donating more in disaster assistance funding than any other country or region.  In 2012, Taiwan provided relief funding to Fiji after a major cyclone.  When a devastating typhoon hit the Philippines in 2013, Taiwan was the first one on the scene with rescue teams and supplies.  Following the tsunami in Indonesia last year, Taiwan was again ready and willing to provide assistance.  To help make the region more resilient to the natural disasters that so often strike, the United States and Taiwan joined hands to conduct several GCTF workshops to train disaster relief personnel from around the region on how to prepare for and deal with these crisis situations.

Taiwan does not have to spend its government and private sector resources to help others.  But it does so willingly and it has much to contribute.  Taiwan’s development assistance, in contrast to China’s debt-trap development model, focuses on sustainable, cost-effective projects that deliver tangible improvements to individuals and their communities.  Taiwan is a global leader in promoting women’s economic and political empowerment; it is making steady progress in meeting the UN’s sustainable development goals; and it has become one of the most effective advocates for promoting innovative entrepreneurship around the world.

Taiwan is an impressive democratic success story, a reliable partner, and a force for good in the world.  The United States supports Taiwan in its efforts to expand its already significant contributions to addressing global challenges.  And as we meet together today with Taiwan, Pacific island representatives and like-minded partners, we look forward to finding new ways to expand our respective efforts to build a more sustainable future for the peoples of the Pacific Islands.

美國在台協會與外交部於2019年10月7日共同舉辦了「太平洋對話」首屆會議。這項重要的新論壇將成為美國、台灣及太平洋地區理念相近夥伴一同探索如何增進合作的機制，以支持台灣在太平洋地區的邦交國達成其發展需求。美國國務院主管澳洲、紐西蘭及太平洋島國事務副助卿暨APEC資深官員孫曉雅（Sandra Oudkirk）訪台參與會議，並與外交部長吳釗燮共同主持這場論壇。美國堅定支持台灣與太平洋島國的關係。我們希望研究美國可以如何與台灣攜手合作，落實願景，使印太區域能夠自由、開放且欣欣向榮。AIT處長酈英傑在活動的開幕致詞中說道:「這項對話機制的目的是在找出美國、台灣及理念相近夥伴能夠共同合作之領域，以滿足我們太平洋友人的各項需求。」處長致詞稿請見：https://bit.ly/2LQWWoY #PacificIslandsDialogue #PID On October 7, the American Institute in Taiwan (AIT), in cooperation with the Ministry of Foreign Affairs convened the inaugural Pacific Islands Dialogue. This important new forum will serve as a mechanism for the United States, Taiwan, and our likeminded partners in the Pacific to explore ways to increase our cooperation to meet the development needs of Taiwan’s diplomatic partners in the Pacific. Sandra Oudkirk, the U.S. Senior Official for APEC and Deputy Assistant Secretary for Australia, New Zealand, and the Pacific Islands, will be in Taiwan to participate and co-host the event along with Foreign Minister Joseph Wu. The United States firmly supports Taiwan’s relationships with Pacific Island nations. We want to explore how we can cooperate in advancing this vision for a Pacific Island community that is prosperous, open, and free. Speaking at the opening ceremony, AIT Director W. Brent Christensen said, “This dialogue is intended to identify areas where the United States, Taiwan, and likeminded partners can cooperate to meet the needs of our friends in the Pacific.” Read Director Christensen’s remarks here: https://bit.ly/2oksrPp