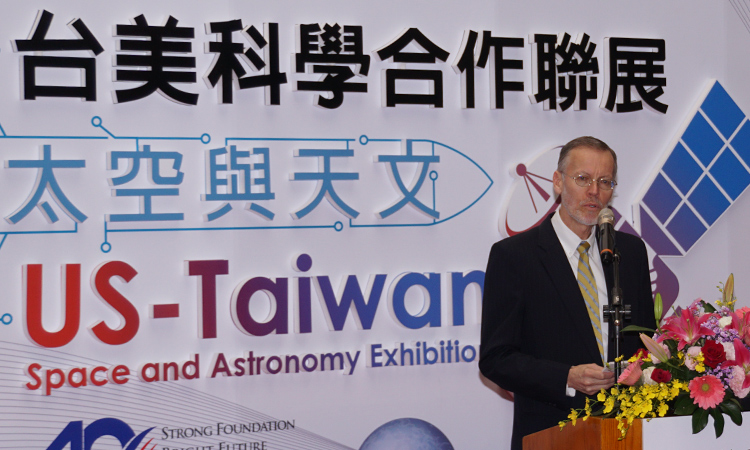 On behalf of the United States and AIT, I am proud to be here today to kick off this very special event with our partners: Academia Sinica, the National Applied Laboratories and National Space Organization, National Chung-Shan Institute of Science and Technology, and the Taipei City Government and the Taipei Astronomical Museum.

I thank our partners for all of their support of this exhibition.  And I want to especially thank Director General Lin of the National Space Organization, Academia Sinica Professor Lee and Director Chu, and National Chung-Shan Institute of Science and Technology Director Han and their teams for putting together this amazing exhibit in such a short period of time.

This year AIT celebrates the 40th anniversary of the Taiwan Relations Act and we have planned a series of events throughout the year focusing on different aspects of our partnership.  February is science month and is dedicated to the 40 years of close cooperation between the United States and Taiwan in science and technology.

This exhibit showcases the results of our strong partnership and highlights different aspects of U.S.-Taiwan space and astronomy cooperation in particular.  We have worked together to develop weather satellites, a particle physics detector that sits onboard the International Space Station, and the world’s largest grouping of telescopes to study outer space.

This exhibition also serves as a prelude to the launch of the U.S.-Taiwan COSMIC-2/FORMOSAT-7 weather satellites later this year, which we are all looking forward to!  The United States and Taiwan have shared traditions of innovation and entrepreneurship and we all benefit from our continued scientific engagement.

I would also like to call everyone’s attention to our photo booth set up [in the back of the room].  As many of you know, AIT recently launched an Instagram account and we would love for you to both follow us on Instagram and take photos of today’s event and tag us.  In addition, we have a video camera set up and we invite you to participate in a video campaign we will be running all year to celebrate AIT@40.  We ask that each of you take minute and tell us, in just one or two sentences, what the U.S.-Taiwan relationship means to you.  We invite you to speak in any language you want – don’t be shy!  We would love to hear from you.  Thanks for your participation!

As AIT Director, I introduced something called the “four promotes” or 《四個增進》.  Two of these four goals are to promote Taiwan’s role in the global community and to promote people-to-people ties, both of which we are doing here today.  Taiwan is a leader in many fields, including science and technology, and has much to offer the world.  And as this exhibit shows, when our scientists and academics put their brilliant minds together, we can accomplish a great deal.  Our people-to-people ties are truly what bind the United States and Taiwan in friendship.

2019 also marks the 50th anniversary of the first moon landing.  NASA’s Apollo 11 landed the first two people ever on the moon on July 20, 1969.  AIT will also be celebrating that historical event later this year.

Again, it is my great honor to join you this morning to not only applaud the work of U.S. scientists and their partners in Taiwan but also to celebrate AIT’s 40th birthday.  The programs we see on display here are just one part of the United States’ deep and broad cooperation with Taiwan.  We have several guest lectures planned over the course of the exhibition, which will last through March.  Please invite your friends and listen to the inspiring stories of how Taiwan’s outstanding scientists made their dreams come true.  I look forward to bringing my friends and family here.

We look back at the strong foundation we have established together and also look forward to further strengthening our relationship over the next 40 years and beyond.  Like our AIT@40 motto says, our goal is to build upon our Strong Foundation and a Bright Future.

Thank you very much for coming and I wish you all a year of success and prosperity.

台美科學合作聯展開跑了！這個展覽呈現過去40年來，美台在科學與科技領域上的密切合作。快來台北天文館看展覽吧！#AITat40 #aitat40celebration #USTaiwanRelations#StrongFoundationBrightFuture #ScienceMonth #立穩根基共創未來 #台美科學合作聯展 U.S.-Taiwan Space and Astronomy Exhibition kicks off today! This exhibit showcases the results of our strong partnership and highlights different aspects of U.S.-Taiwan space and astronomy cooperation in particular over the past 40 years. Come and see the exhibition @the Taipei Astronomical Museum!