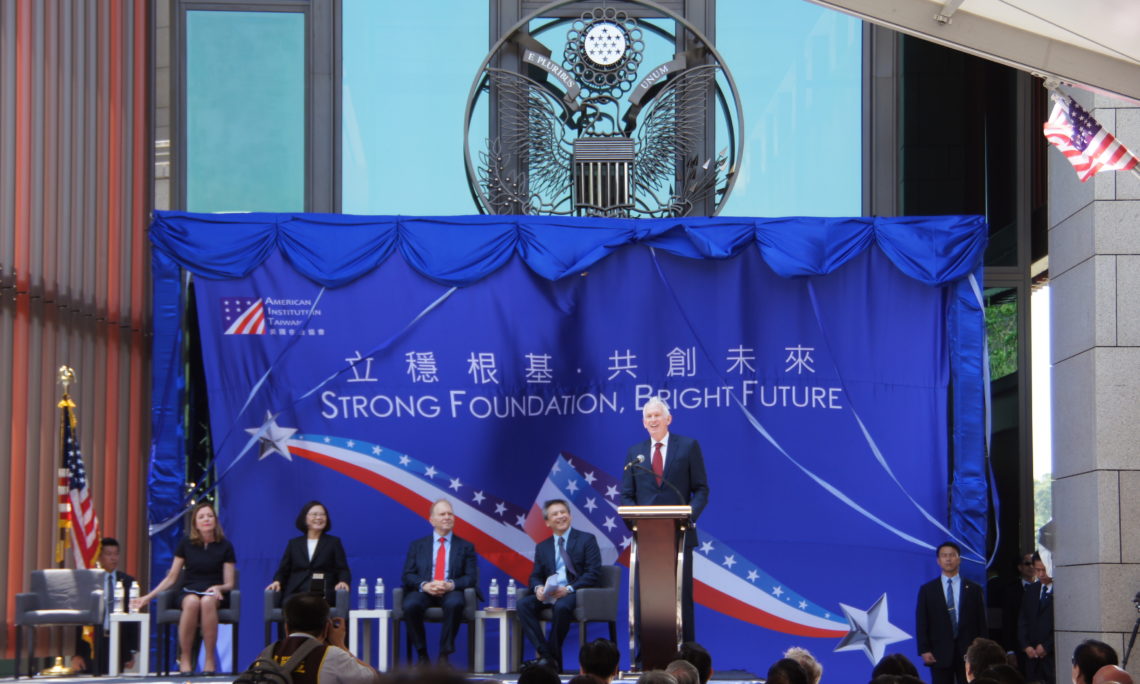 As Chairman of the American Institute in Taiwan, I have the great pleasure to welcome you to this momentous event in the ties between the United States and Taiwan.

Today’s dedication ceremony for AIT’s new office complex is a milestone in the relationship that all of us here so deeply treasure.  This occasion marks the remarkable journey that we have taken together since AIT was established by the Taiwan Relations Act in 1979.  As Taiwan has transformed itself into a vibrant democracy and a model for the Indo-Pacific region and beyond, our relationship has grown into a close partnership based on the unshakable foundation of shared values and interests.

In particular, on this dedication day, I would like to express our deepest appreciation for the cooperation and assistance of those on the Taiwan side who were instrumental in making this project a reality.  That this construction began under President Ma from one political party and has been completed under President Tsai from another is, in a way, indicative of the support throughout Taiwan society for close ties with the United States.

That broad support is mirrored in the United States by the wide affection Americans have for Taiwan:  across the political aisle, in the Executive and Legislative branches alike, at all levels of government, and throughout American society.  Americans deeply admire Taiwan’s achievements over the past decades in developing an advanced economy and establishing a vibrant democracy.

I have been privileged to witness that transformation during the times I lived here on Taiwan – from my early days as a language student when Taiwan was under martial law, to my time as an AIT section chief observing Taiwan’s first direct, democratic election for president.  As AIT chairman for the past year and a half, I have been struck by the commitment of people here to their democracy and their determination to nurture and defend it.

In closing, let me reaffirm the United States’ abiding commitment to the Taiwan Relations Act.  Together with our friends on Taiwan, we will continue to advance the ties that so closely bind our economies and people, and support Taiwan’s ability to defend itself and to make positive contributions to the international community.  I am confident that we will carry this partnership forward to new heights and meet the test of decades to come.

Now, it is my great honor to introduce our next speaker, President Tsai Ing-wen, who has played a key role in Taiwan’s remarkable economic and democratic transformation.  I know her to be both a tireless advocate for Taiwan and a great friend of the United States.  Ladies and gentlemen, President Tsai.