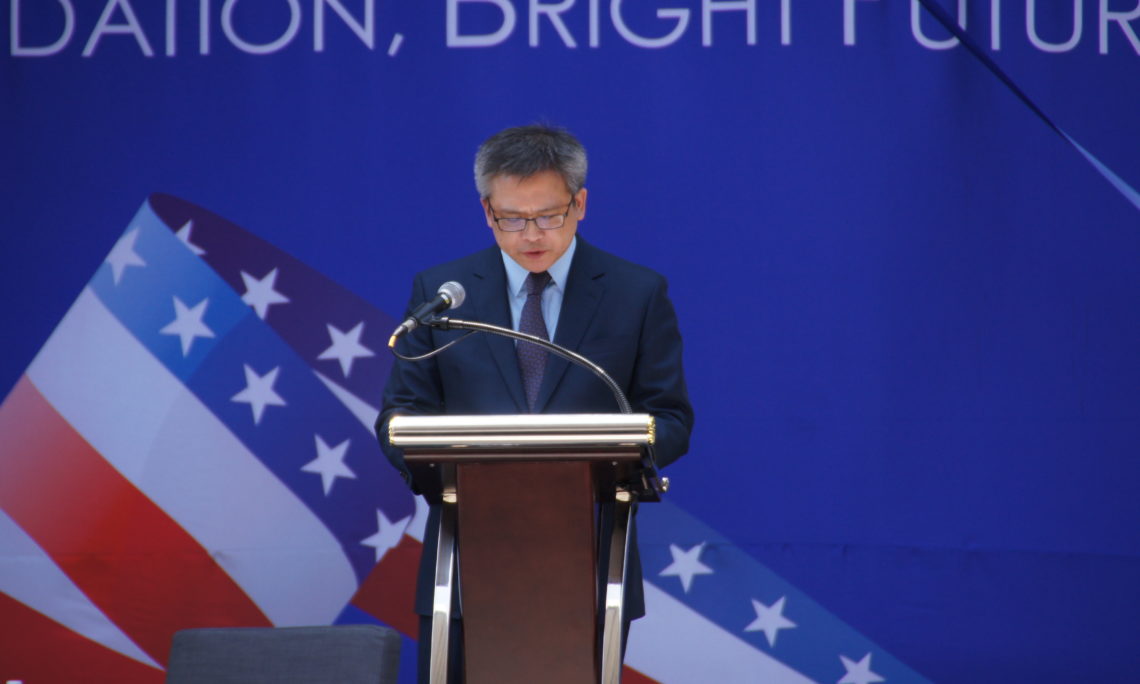 I am deeply honored to be here today as Director of the American Institute in Taiwan to celebrate one of the grandest milestones in the history of AIT, the dedication ceremony of AIT’s new office complex in Taipei.  Who could have imagined when AIT first opened its doors on Xinyi Road nearly 40 years ago that we would be standing here today, dedicating this beautiful structure behind me as the new home for AIT?  Who could have foreseen when AIT was established in 1979 that the partnership between the United States and Taiwan in 2018 would be so significant?

We should all be proud of this milestone, which is a symbol of the close cooperation and enduring friendship between people of the United States and Taiwan.

This friendship is rooted in our shared values – democracy, human rights, freedom – the values we all cherish.  We see signs of this friendship across the United States and Taiwan.  In Congress, where Taiwan enjoys bipartisan support, as evidenced by the funds allocated by Congress for this $255 million project.  In the Legislative Yuan, where there is strong support for the U.S.-Taiwan partnership across the political spectrum.  And here in Taiwan, where right now there are nearly 80,000 U.S. citizens, so many Americans come to enjoy the amazing sites and charm of these beautiful islands.

This building is both a reflection of our close and cooperative people-to-people ties, and a product of those ties.  In a sense, AIT’s new home was built by the American people and the people on Taiwan, by their passion, by their vision for what our friendship could become.

Of course we owe a deep debt of gratitude to the champions of this project in the U.S. Congress, the State Department, and leaders in Taiwan.  But without the support of the people of the United States and Taiwan, without the countless people who have devoted their talent and energy to advancing our relationship, this building would not be here today.

Among the many people who have built the U.S.-Taiwan friendship and without whom today’s event would not be possible is a special group that I would like to recognize – the staff of AIT.  I have been blessed to serve as AIT director with a tremendous team of nearly 500 American and Taiwan staff.  This team has worked tirelessly – some for more than 30 years – to advance the enduring U.S.-Taiwan partnership.  On behalf of all of the former AIT directors – some of whom are with us today – I would like to say a heartfelt thank you to all the employees of the AIT family, both current and former, for their care and dedication in building this vibrant relationship.

Together, the United States and Taiwan have accomplished a great deal to benefit ordinary people.  AIT and our partners in Washington succeeded in bringing Taiwan into the Visa Waiver Program and Global Entry, making it easier for Taiwan travelers to visit the United States.  AIT and our very capable Taiwan partners have brought U.S. health experts to Taiwan to train public health officials from the region on combatting pandemic diseases.  AIT, through EducationUSA, has helped thousands of Taiwan students navigate the application process to study at U.S. universities.  AIT has provided Fulbright grants to hundreds of Taiwan students and scholars to study and research in the United States, and Taiwan has welcomed hundreds of U.S. Fulbright recipients to study and teach here.  Serving and protecting the U.S. citizen community in Taiwan is AIT’s highest priority and will continue to play a central role in AIT’s work at our new facility.  In all of these and countless other ways, AIT has built bridges between the United States and Taiwan that have improved and enriched the lives of our people.

During my three years on Taiwan, I have often said that Taiwan has no better friend than the United States.  As a testament to this friendship, to the U.S. commitment to Taiwan, and to our staying power in Taiwan, I offer you this – a tangible symbol that the United States is here to stay.