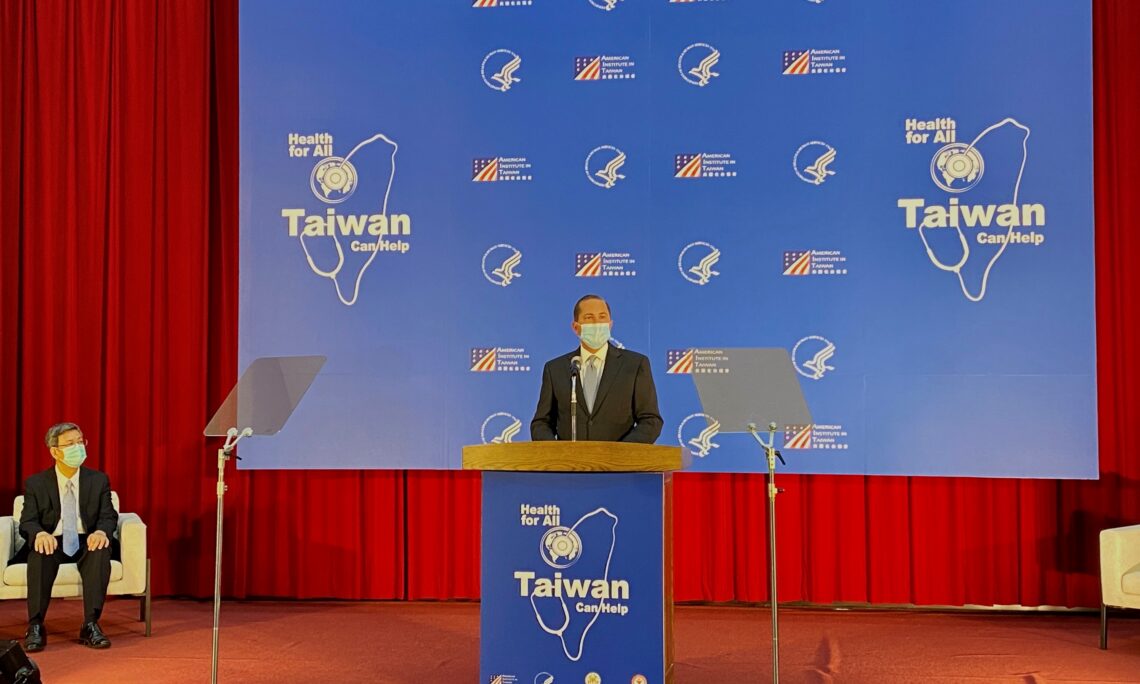 It is an honor to be here in Taiwan as a representative of the American people and to bring greetings from a great friend of Taiwan: President Donald J. Trump.

It is also an honor to be here at National Taiwan University, an institution that stands for so much of what has made Taiwan great, including your industrial and scientific prowess and your spirit of open inquiry that have helped make you free and prosperous.

I am grateful also to have Brent Christensen, director of the American Institute in Taiwan here, and for what he has done with Taiwan’s leaders here today to deepen our friendship.

Taiwan is a democratic success story, a reliable partner, and a force for good in the world.

Taiwan’s vibrant democracy and thriving free-market economy have made it a shining star in the Indo-Pacific and a treasured friend of the United States.

We expect this economic relationship to deepen further in the coming years. It may be rather difficult for Taiwan to move up past Canada and Mexico, given that we are separated by thousands of miles of ocean rather than a land border, but for Taiwan, I would say anything is possible.

Today, I want to recognize another way in which Taiwan has distinguished itself among its peers and neighbors: its world-leading public health capabilities and, specifically, its successful work to combat COVID-19 within and beyond its own borders.

Before I do so, however, it is appropriate to acknowledge the loss of one of Taiwan’s great heroes, someone who laid the groundwork for many of the successes I will discuss today: your former president Lee Teng-hui.

President Lee is not only one of the great men in Taiwan’s history, but in the broader history of Asia and the world’s march toward democracy. He had a great love for the United States, having earned his doctorate at Cornell University.

President Lee’s legacy goes beyond just political freedom. It has had a very tangible effect on the lives of people here in Taiwan and around the world today. The democratic legacy he built has made Taiwan a leader not only in freedom and economic growth, but also in global health.

The United States believes these accomplishments are inextricable from each other: that our shared model of democracy and transparency is essential to keeping our people safe from the health threats of today and tomorrow.

Taiwan’s success is especially notable because of the challenges it has faced in gaining recognition for this work on the world stage. Taiwan is a model for the world in so many respects. Yet political bullying has kept it from being able to fully share its successes and develop relationships that would make us all healthier, wealthier, and safer.

Certainly, Taiwan’s success in combating COVID-19 speaks for itself. Even with a population of more than 23 million, Taiwan has had fewer than 500 cases, one of the lowest case rates in the world.

Taiwan’s early and decisive implementation of border screening has allowed you to identify the vast majority of imported cases and avoid substantial community spread. Through the work of Taiwan’s CDC, you have shared information freely and rapidly, enlisting the cooperation of the public to track and contain the virus more effectively than just about anywhere else in the world.

Taiwan’s work on contact tracing in particular has set the standard for the world. Like its neighbors in East Asia, Taiwan has used technology like cellphone locations to assist with tracing contacts of known COVID-19 cases.

You have added your own entrepreneurial flavor, too, by allowing crowdsourced, democratic solutions devised by individuals to flourish through fora like vTaiwan.

Among the many benefits of Taiwan’s successful response to the virus has been the fact that Taiwan has not had to give up its love for sports.

I understand that Taiwan’s baseball league was able to start games this spring with a delay of only three weeks. Unfortunately, the United States has just begun our baseball season, with our opening day coming just a couple of weeks ago.

There is one silver lining to that delay, for fans from my current workplace, Washington.

Our Washington Nationals, the one-time home of Taiwan’s Wang Chien-Ming, had an extra several months to relish their status as the World Series champions before starting the defense of their title this summer.

Taiwan’s success in combating the virus has not only saved lives and kept baseball going—as important as that is.

Taiwan has used its success and its wealth to aid others around the world in their response, too. That includes the Pacific island nations with which Taiwan has developed such a strong relationship, based on freedom, good governance, and mutual respect, sending supplies and direct technical assistance to help these states control their own epidemics.

I want to recognize those representatives of the Pacific island nations here today, ambassadors from the Marshall Islands, Nauru, Palau, and Tuvalu.

I want to thank all of you for the close relationship you have fostered with Taiwan and your willingness to speak up for Taiwan in international fora.

The Chinese Communist Party had the chance to warn the world and work with the world on battling the virus. But they chose not to, and the costs of that choice mount higher every day.

As the virus emerged, the People’s Republic of China did not live up to the binding obligations it had under the International Health Regulations, betraying the cooperative spirit we need for global health.

This came as little surprise to Taiwan, which experienced the consequences of Beijing’s cover-up of SARS in 2003, costing dozens of lives in Taiwan and dealing serious disruption to the whole region’s economy.

I believe it is no exaggeration to say that, if this virus had emerged in a place like Taiwan or the United States, it might have been snuffed out easily: rapidly reported to public health authorities, who would have shared what they knew with health professionals and with the general public.

Instead, Beijing appears to have resisted information-sharing, muzzling doctors who spoke out and hobbling the world’s ability to respond.

I can attest to this personally. The same week the virus was finally reported, and before any cases had been confirmed outside China, U.S. CDC Director Robert Redfield spoke frequently with his counterpart in the PRC about the outbreak. He repeatedly offered CDC’s assistance to the PRC to understand the disease and to assist in response efforts.

Yet it took until mid-February, weeks after the virus had spread well beyond China’s borders, for Beijing to admit a team of international experts to assist with the investigation—while claiming that the U.S. had been doing nothing to help.

Taiwan presents a strong counterpoint. Your slogans for foreign assistance during COVID-19 have been Taiwan can help, and Taiwan is helping.

Sadly, for political reasons, some don’t want Taiwan to help—even when it costs lives.

That is the unmistakable message from Beijing in the way it has recently dealt with the World Health Organization. From 2008 through 2016, Taiwan was able to participate in the World Health Assembly, the annual meeting of the WHO, as an observer.

But in 2016, as all of you know, Taiwan held free and fair elections, leading to the inauguration of President Tsai. The following year, because of that political development, Beijing changed its tune on who ought to be part of a public health conversation.

Taiwan was not invited as an observer to the 2017 WHA, and it has not been invited since—even in the midst of a global pandemic, with so many lives at stake.

Representing the United States, I have spoken out against this decision at each WHA I have attended.

This spring, we issued our first joint statement with Taiwan on the issue, highlighting how much more illogical and counterproductive this decision has become during a global pandemic.

This behavior is in keeping with Beijing’s approach to WHO and other international organizations. The influence of the PRC far outweighs its investment in this public health institution—and it uses influence not to advance public health objectives, but its own narrow political interests.

Since the outbreak of COVID-19, for instance, Beijing has lobbied against the investigations and reforms desperately needed to make WHO a more effective institution.

Taiwan’s exclusion from WHO is especially puzzling when its contributions to global health began long before the COVID-19 pandemic.

The United States and Taiwan have both been strong advocates of global health security and the International Health Regulations.

This is a remarkable and meaningful commitment on Taiwan’s behalf, and helps to cement Taiwan’s status as one of the world’s leaders on global health security.

I want to recognize the work of Professor Chen in making this assessment possible. The Indo-Pacific region and the whole world are safer because of Taiwan’s commitment to this public health work.

At other times, Taiwan has offered to make contributions to global health, only to have been rebuffed. In the spring of 2018, for instance, the World Health Organization put out an urgent call for funding to respond to an Ebola outbreak in the western Democratic Republic of the Congo. Taiwan offered a million dollars for this important fight, but the political squabbles over Taiwan’s status at WHO ended up making this donation impossible.

Taiwan’s global health efforts have continued during the pandemic.

That includes engaging with experts from my department and the health departments of Japan and Australia to strategize on the COVID-19 response through our joint Global Cooperation and Training Framework, which celebrates its fifth anniversary this year.

We worked especially closely with Taiwan during the 2003 SARS outbreak.

The world has now experienced two serious viruses that have emerged from China in the past two decades, SARS and COVID-19. The issue is not which country is the source; the issue is how that country responds.

There is very little about diplomacy that is simple.

But when it comes to health, the expectations of the world community are quite commonsense: You can’t get anywhere without transparency.

How can the world possibly work together to prevent, contain, and combat viruses unless we’re willing to share information about these threats with each other?

How could a doctor cure a patient without the patient disclosing his symptoms?

How could doctors ever learn to treat a virus unless other doctors can honestly share their experiences?

We have had successful cooperation and engagement with the PRC on a few issues, including on some areas in health.  But on the most important health challenge of this century, genuine cooperation was lacking.

I am so pleased to be here today, to thank Taiwan for setting a positive example and for choosing, enthusiastically, to be a part of the global health community.

Your contributions have never been more appreciated than they are today.

In these trying times, the United States knows that we will always have a friend in Taiwan, and we will not shy away from telling the rest of the world that they can rely on Taiwan too.

Thank you all for inviting me here today and for your warm welcome to Taiwan.