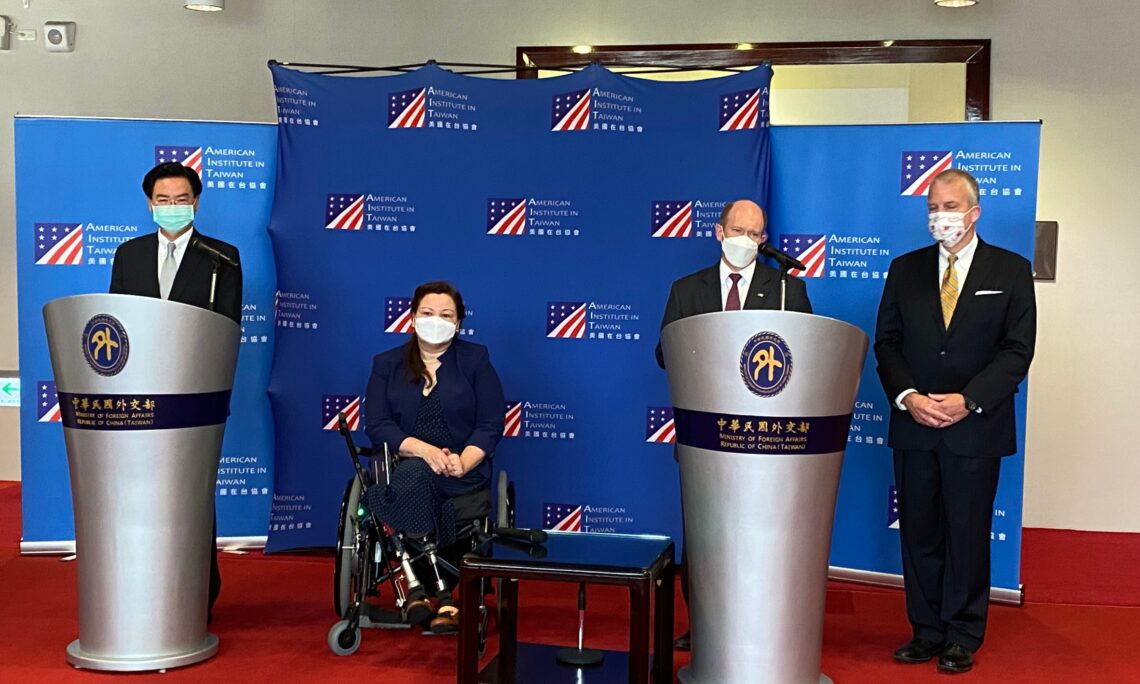 Ni Hao! Thank you so much for welcoming us. It is such an honor for me to join with these two tremendous senators: Senator Duckworth and Senator Sullivan, who have served our nation in our nation’s military, who’s personal stories of commitment and engagement in this region of the world are inspiring to me and many others.

I serve on the Senate Foreign Relations Committee, and I chair the Appropriations Subcommittee in the Senate that is funding vaccine distribution to the world, in partnership with the Biden administration. As we were discussing weeks ago, our concerns about the world and about this pandemic as it continues to be a threat to health around the world. We were urging the Biden Administration to work with us, a bipartisan group across the Senate and the House, to announce significant donations of vaccines to the nations in need, as you just heard from Senator Sullivan.

It is a long and deep relationship between the United States and Taiwan. That was made purposeful and pointed and real for us in the difficult early days of this pandemic, by a gift, a contribution of 10 million masks at a moment when Americans were worried about where they could find masks. And where some other countries used that access to PPE to their political benefit. In this moment, we are announcing the first of what is going to be a significant effort by the Biden Administration and the United States Congress to provide up to 80 million doses to many countries around the world. And because Taiwan has been prevented from joining the World Health Assembly, and has had roadblocks put up towards its access to safe and effective vaccines, we thought it’s particularly important to celebrate the Biden administration’s initiative, and the support of Congress that is bipartisan. Taking these effective, safe vaccines – developed under the previous administration in the United States and with partnerships around the world – and make certain that the people of Taiwan know: there are some countries that question whether the United States will come to the aid of our friends in Taiwan. This is a moment we thought it was urgent and important for us, Mr. Foreign Minister, to make it clear that we intend to do so.

I represent the small state of Delaware. My predecessor is now the president of the United States. 42 years ago, he voted for the Taiwan Relations Act. As we were traveling, a member of our company was reading a book about the history of the Taiwan Relations Act and sharing with us about it. Dan (motioning to Senator Sullivan) is ever the scholar. It was helpful to be reminded that this is not a new relationship. This is not a new partnership. I was last here with AIT Director Christiansen when we were opening a beautiful new state of the art facility, a center for the United States’ engagement here with Taiwan.

As we return tomorrow to the United States Senate, we will be taking votes this coming week to pass a significant piece of legislation coming out of the Foreign Relations Committee. It was known as the “Strategic Competition Act” and includes provisions to make clear, again, the strength of the US-Taiwan relationship. As it moves through the full Senate, with the support of these two senators who are on the Commerce Committee, as it is being shaped and finally hopefully enacted- there are always the changes of legislation to come – but I’m very hopeful that we will take a strong bipartisan vote in the coming week, and pass the “US Innovation and Competitiveness Act.” It specifically recognizes the strategic importance of the U.S.-Taiwan relationship; the urgency of investing in innovation; and taking steps, such as we take today with the announcement of this vaccine contribution, to more tightly weave together the open societies, the democracies of the world. Those that value innovation and science, those that protect inventions, and those that want to use the fruits of that science to help the world move past this terrible pandemic, not by adding strains to it, but by giving freely of what both of our societies have been able to develop.