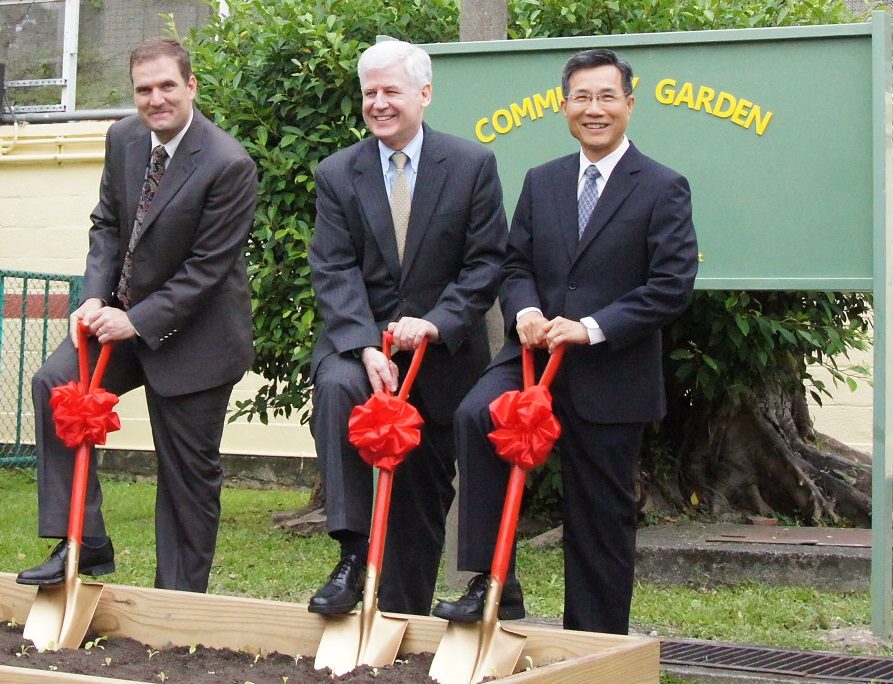 We had the great honor here last week to welcome the Administrator of the United States Environmental Protection Agency, Gina McCarthy.  Her visit, which was the first by a Cabinet-level U.S. official in nearly 14 years, emphasized the very strong partnership between the United States and Taiwan on environmental issues that has been built up over the past two decades.  The presence of Dr. Chen and Ms. Tsai this morning is another reminder of the strength of our environmental cooperation.  Thank you again for being here.

I also want to thank AIT’s Green Team, created under the capable and energetic leadership of General Services Officer Mike Graham.  The Green Team has worked hard to set up this garden.  They have also revamped and strengthened AIT’s recycling program, optimized our motor pool operations, and conducted a beach cleanup at Fulong Beach.

Let me also thank the many AIT gardeners among us.  I didn’t know we had so many green thumbs among our ranks. I really admire all of the spade work that has obviously gone into preparing these plots.  And I look forward to harvesting the vegetables and herbs that we’re growing in our Executive Office plot and also swapping some of our produce in exchange for what others are growing.

I think this AIT Community Garden is a wonderful sign of AIT’s efforts to contribute – in a small but significant way – to the future greening of an already-beautiful city.

As many of you know, I lived in Taiwan in the 1970s and again in the 1980s.  The differences between the Taipei of that era and the Taipei of today are remarkable: the air is cleaner, the water is clearer, and the quality of life for the city’s residents is greatly improved.  It took far-sighted leadership to make these changes, but it was also the commitment of all residents of this city and surrounding environment to conservation work and recycling activities that made this progress possible.  Taiwan people at all levels can take pride in their accomplishments in this area.

That’s why something as simple as a community garden can make a big difference.  This garden is not only a symbol of our cooperation in building a greener Taipei, but I hope it will also help educate both AIT and the broader community about the little things we can all do to create a greener, more sustainable future.  I hope that AIT’s garden will inspire similar projects in other locations.

As you can see, you don’t need a huge amount of space to make something like this happen, but the cumulative effect of many gardens could have a big impact on promoting awareness about conservation, environmental problems, and climate change.

There is another U.S. Cabinet official who is very much focused on environmental issues.  I was in Washington recently and Secretary of State John Kerry addressed our group.  I and others remarked on just how passionate Secretary Kerry is about the environment.  During his speech in Jakarta in February, he remarked that climate change is linked to national security and economic opportunities.  I think it is incumbent on all of us to do what we can, not just on Earth Day but every day, to ensure we’re doing all we can to preserve the environment, wherever we are.

With that, please allow me to wish you a Happy Earth Day.

Now, I would like to invite Dr. Chen, Ms. Tsai, and Green Team leader Mike Graham to grab a shovel and join me in inaugurating the AIT Community Garden.

Thank you for being here today.