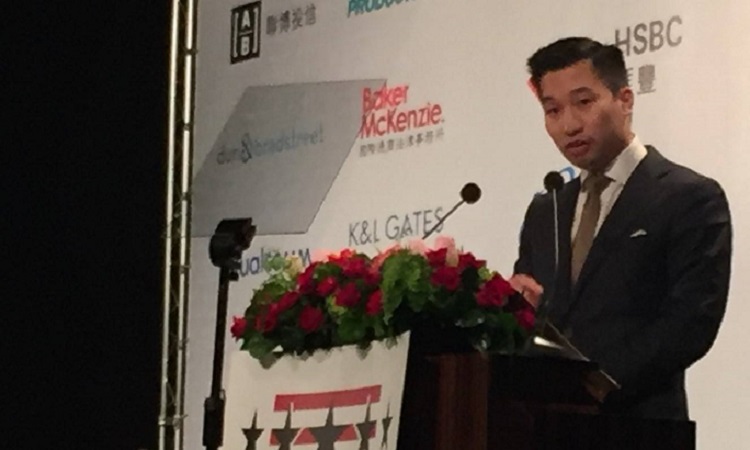 Being here at this event is personally gratifying to me because it’s a chance to renew some old connections. President Tsai, on the occasions we’ve met in years past, I referred to you as Dr. Tsai. It is an honor for me that this time, on this trip to Taiwan, I can greet you by calling you President Tsai.

And it’s with great satisfaction that I share the stage with Chairman Albert Chang. It’s been many years, but at one time Albert and I were law students together, and interns at none other than the U.S. State Department. We would meet in the basement cafe of the State Department and plot out how we could advance U.S. interests abroad in our careers, careers that had not yet even begun. So to be here tonight in Taipei with Albert talking about how we deepen U.S.-Taiwan relations is especially meaningful to me, because it completes a certain circle for both of us.

But beyond the personal import, this is a truly wonderful event. I am honored and delighted to be here. This gathering reflects the very best of the U.S.-Taiwan relationship. The society of America and the society of Taiwan are deeply connected. And that’s due in no small part to the efforts of everyone gathered in this room.

We’ve heard many congratulations tonight on the work the Chamber and its friends have undertaken in the past year. And those sentiments will be richly deserved.

Each of these three certainties bears some elaboration.

Taiwan’s constitutional democracy is indeed an example for the entire Indo-Pacific.

The Taiwan people understand the fundamental truth that people everywhere long to be free, and that constitutional democracy is the best and most moral system of government humanity has ever devised. They deeply understand this because they’ve earned it. They’ve done the hard work of transitioning to democracy, with all the sacrifice and all the compromise that entails. As a result, they’ve reaped the rewards.

It’s no coincidence that Taiwan’s democratic flourishing has gone hand-in hand with its economic one. If we look at the world today, the governance structures of the most developed and innovative economies are grounded in constitutional rights and democratic values. Where there are strong property rights, you can have borrowing and investment. Where there is the rule of law, you can have contract. Where government is accountable, where corruption is punished, and where merit is rewarded, populations choose to invest in their skills and education because they know doing so will not be wasted. And where the purpose of government is to protect the liberty of the people, you can unleash the creative energies of each individual.

Dynamic, broad-based, and sustainable economic growth can never hinge on the whim of a dictator. It can only arise in the stable and certain conditions created under a constitutional government. Taiwan is a clear example of this truth, and Taiwan is an inspiration to the rest of the Indo-Pacific.

As AmCham’s recent Business Climate Survey pointed out, U.S. firms are optimistic about opportunities in Taiwan. Many of the largest U.S. technology firms have chosen to make Taiwan central to their hardware-software integration, to their research and development, and to their artificial intelligence innovation plans. U.S. investors of all stripes are intrigued by the opportunities here.

Now, I’ve said that Taiwan is an example for the entire Indo-Pacific. But I want to make a very important point.

For that example to have the most force, for that example to do the most good, Taiwan can no longer be excluded unjustly from international fora. Taiwan has much to share with the world on issues of public health, humanitarian relief, and sustainable development. That it would be hindered from doing so is not only unjust for Taiwan, but unjust for every country and every individual in need who could benefit from Taiwan’s contributions.

This is why it’s U.S. policy to promote appropriate respect and treatment for Taiwan’s role in the world. I can assure you, the United States government—and the United States private sector—will do their part to ensure Taiwan’s stellar international example shines brightly.

The second certainty is that the United States, Taiwan, and all our partners can work together to strengthen the free and open order of the Indo-Pacific.

The free and open order has fostered peace, stability, and prosperity in the region for 70 years. As President Trump made clear during his historic trip through the region at the end of last year, the United States remains fully committed to strengthening this rules-based system.

On the economic front, we do that in two ways. First, we work tirelessly with our partners to set and bolster rules that promote open markets; free, fair and reciprocal trade; and private sector-led economic growth.

Second, we take action to enforce those rules.

Rules only have meaning if they’re respected. Unfortunately, there are actors who fail to give due respect to the obligations they voluntarily signed up for. When economies, large or small, are able to flout the rules, cheat their trading partners, force intellectual property transfer, protect national champions, steal trade secrets, and use market-distorting subsidies, it undermines the integrity of the entire rules-based system. And ultimately, it will undermine the prosperity of the entire region.

But the task of promoting the rules-based system is not the United States’s alone.

Taiwan has an important role to play. The United States has been pleased to note the continuous improvement of Taiwan’s legal and regulatory environment. Taiwan’s leaders have embraced administrative procedures more in line with international norms. They’ve protected intellectual property and vigorously prosecuted the theft of trade secret. They oppose market-distorting subsidies, and are focused on forging close economic ties with countries throughout the Indo-Pacific.

In particular, the United States welcomes Taiwan’s efforts to strengthen its ties with the countries across the region through its New Southbound Policy. While Taiwan has been viewed as a gateway into the China market, Taiwan is also emerging as a leading economy of Southeast Asian and South Asian markets. More Taiwan companies are doing business with these markets. Taiwan is increasingly open to tourists from across Asia. And academic exchanges are giving foreign students a taste of Taiwan’s top-notch educational system. Taiwan is set to grow closer to these countries in a way that will lay the foundation for even more Taiwan contributions to global prosperity and cooperation.

The United States supports Taiwan’s closer economic integration with its neighbors in East Asia, Southeast Asia and South Asia, as well as in the Pacific. Taiwan’s contribution to a network of cross-cutting linkages will strengthen the rules-based fabric of the region and ensure its free and open nature.

Certain of the United States’s Support for Taiwan

The final thing I am certain of is the United States’s support for Taiwan. As reflected in the U.S. National Security Strategy, we wish to strengthen our ties with the Taiwan people and to bolster Taiwan’s ability to defend its democracy. Our commitment to these goals has never been stronger.

Anybody who has spent time in Taiwan knows it’s a special place. What Taiwan has accomplished over the past thirty years is truly extraordinary. The aim of U.S. policy is to ensure that Taiwan’s people can continue along their chosen path, free from coercion.

This is the mission of my colleagues at the American Institute in Taiwan in both our Taipei and Kaohsiung offices, and they have the full support of all of us back in Washington.

Our relationship with Taiwan is stable. Our relationship is secure. And—uniquely—our relationship is grounded in U.S. law through the Taiwan Relations Act. When you examine what the United States looks for in a partner, Taiwan checks all the boxes. Democracy? Check. Market economy? Check. Shared values and interests? Check. Great food? Definitely check…

There are a number of policy areas the U.S. is focusing on with Taiwan. And there are concrete initiatives I expect will continue long into the future.

Through the International Environmental Partnership, we’re raising awareness together around the world about the importance of environmental health.

We’re also working closely with Taiwan to deepen our commercial relationship through the Trade and Investment Framework Agreement, or TIFA. Under the TIFA, we’re advancing many of the same priorities outlined in AmCham’s annual White Paper. That includes transparent administrative procedures, strong protection of intellectual property, a predictable investment climate, and a multi-stakeholder approach to regulatory matters.

The United States and Taiwan have enjoyed decades of close economic cooperation on technology, including in electronics and semiconductors. We are now working to bring the U.S.-Taiwan economic relationship into the digital age through increased digital economy and cybersecurity cooperation.

At APEC, we’re working together to advance an ambitious, digital agenda. One notable area is the APEC Cross Border Privacy Rules System, or CBPR. The CBPR protects consumer privacy and eases business compliance by providing voluntary standards for privacy protection that allow data to flow across the region. We welcome Taiwan’s intent to join the CBPR system. That demonstrates the island’s strong commitment to embracing the digital age, robustly and responsibly.

High-level visits from officials of the U.S. Small Business Administration last fall opened the door to more cooperation on small- and medium-sized enterprises, or SMEs. Our respective SMEs and startups make natural partners as we co-develop emerging technologies, such as the internet of things, biomedical devices, smart machinery, and artificial intelligence. I am particularly pleased that our emerging SME cooperation has put the promotion of women’s entrepreneurship front and center. Promoting women’s entrepreneurship is not only a social issue—it’s smart economics. No economy can fully flourish if the talents of half its population aren’t realized.

We continue to work closely with Taiwan businesses and investors to build lasting bridges between our two economies. And that will be even easier now with the launch of Global Entry in Taiwan in November, a launch that coincidentally occurred on the fifth anniversary of Taiwan’s entry into the Visa Waiver Program.

The United States and Taiwan also cooperate on global security issues. Taiwan is a valued member of the global coalition to defeat ISIS, pulling its weight to beat back ISIS’s campaign of terror. We are also actively engaged on joint non-proliferation efforts. And Taiwan has taken significant action as part of the international maximum pressure campaign on North Korea.

All of these cooperative efforts arise from one foundational commitment: the U.S. policy—embedded in law—to, first, strengthen ties with the Taiwan people and, second, strengthen their ability to defend their hard-won democracy.

Because our relationship isn’t transactional. Instead, it is undergirded—and animated—by shared and enduring values. The United States has been, is, and always will be Taiwan’s closest friend and partner.