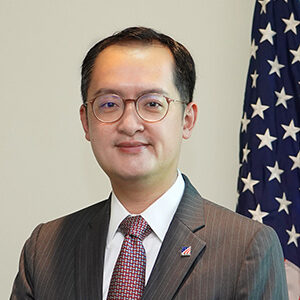 Richard Jao is the Political Chief at the American Institute in Taiwan (AIT).  He previously served as the Political External Unit Chief at the U.S. Embassy in Beijing, which covered U.S.-China relations and Chinese foreign policy, particularly its relations with North Korea.  Richard has also worked in the U.S. Department of State’s Office of Japanese Affairs and as Political Adviser for Iraq and Afghanistan at the U.S. Mission to the United Nations in New York.  His other overseas assignments include Lahore, Kabul, Budapest, and Guangzhou.

Richard is from New York.  He holds a B.S. from the University of California, Berkeley, a M.A. in East Asian Studies from Columbia University, and another M.A. in Defense and Strategic Studies from the U.S. Naval War College.  He has studied Chinese, Hungarian, and Urdu.