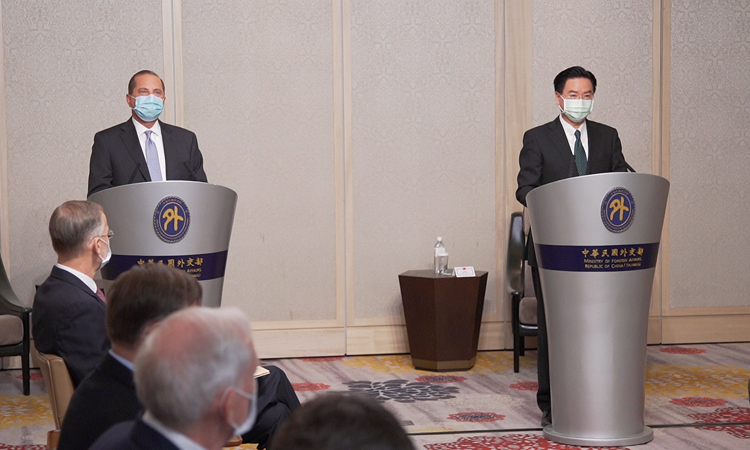 On Tuesday, U.S. Health and Human Services Secretary Alex Azar and the U.S. delegation met with Foreign Minister Wu for a conversation on the U.S.-Taiwan friendship and Taiwan’s global health leadership. Secretary Azar congratulated Minister Wu for all that Taiwan has done for global health, and stated the belief of the United States that Taiwan’s accomplishments should be recognized on the world stage, and that Taiwan should be able to share these lessons and its world-class expertise in international forums, such as the World Health Assembly. Secretary Azar has made this point repeatedly to the World Health Organization, from which Taiwan has been excluded as an observer for the last four years. They also discussed how Taiwan is an important partner for economic progress and security in the Indo-Pacific Region.

Secretary Azar then met with former Vice President Chen and a group of COVID-19 response experts for a discussion on Taiwan’s pandemic response and ways the United States and Taiwan can further their collaboration on disease response and other global health issues.

Taiwan Vice President Lai then hosted the U.S. delegation for a lunch, where the Secretary thanked the Vice President for the warm welcome he received in Taiwan. The delegations discussed how this visit reaffirms the United States’ commitment to Taiwan as a free and open democracy in East Asia, and is a recognition of Taiwan’s health leadership.

Secretary Azar delivered a major address at National Taiwan University, emphasizing that Taiwan is a democratic success story, a reliable partner, and a force for good in the world. Taiwan’s success in responding to the virus not only saved lives, but allowed them to aid others around the world by sending supplies and direct technical assistance to help control their epidemics. Their response stands in stark contrast with the apparent response from the Chinese Communist Party (CCP), which, Secretary Azar said, did not live up to the binding obligations it had under the International Health Regulations, betraying the cooperative spirit needed for global health.