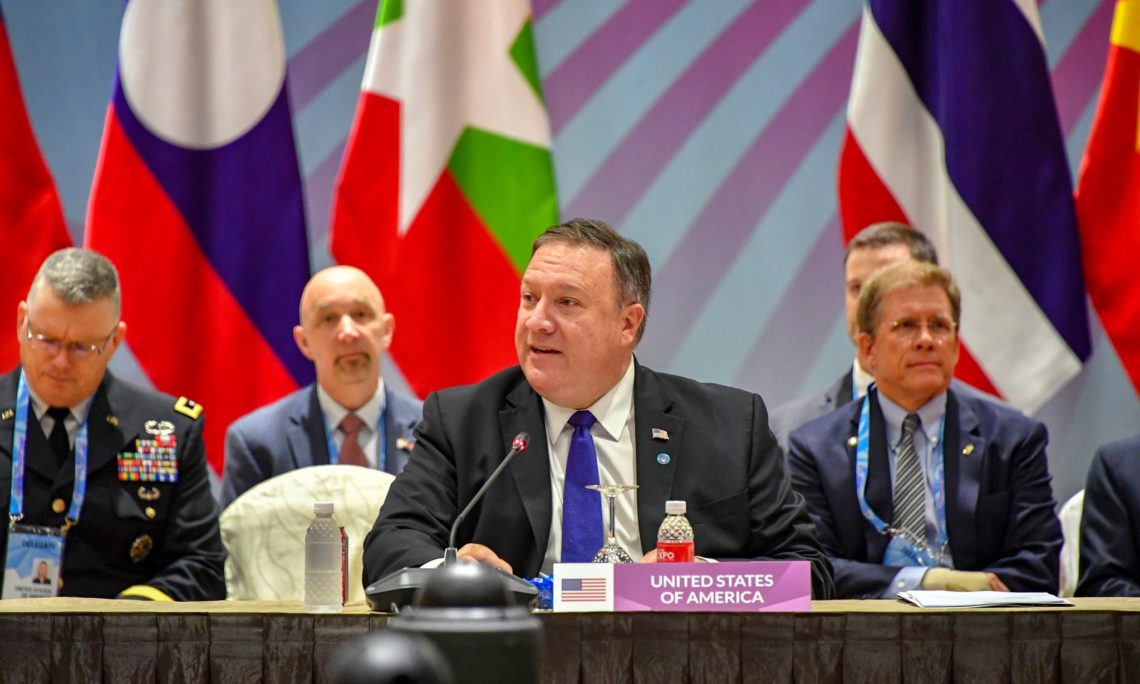 QUESTION: Is America prepared to push the world into a recession because of these trade wars?

SECRETARY POMPEO: America is always going to be a great partner for Asia, Southeast Asia in particular. It’s great to be back here in Singapore; I’ve had fantastic meetings all day with my counterparts, talking about America’s commitment to making sure that we had a free, fair, open Indo-Pacific.

With respect to trade, that’s what we’re looking for too. We want every country to rise. We want each nation to have the opportunity to trade, to buy American goods, to sell goods into America. These are the things that President (inaudible). We are a radically free-trade country, and President Trump is enormously supportive of that.

QUESTION: But the tariffs seem to be things that are going to put frictions now on that free trade.

SECRETARY POMPEO: What we’re looking for is to remove barriers. This is what has – put in place over decades. There was tremendous unfairness in the system, and our administration is simply trying to put that balance there. The President has said clearly: zero tariffs, zero subsidies, zero non-tariff barriers. Sign us up, we’ll take it. America is trying to reduce friction in the trading system. And when we do, we’re confident that countries like here in Singapore and other places will thrive, as will America.

QUESTION: Is there a timeline, then, for these trade tariffs to be (inaudible) rolled back on? Is there any kind of limit where you’ll say, no, okay, it’s now gone too far?

SECRETARY POMPEO: Well, we’re looking for each country with whom we’re engaging in to fix their own systems in a way that they’re fair, reciprocal, they respect the rule of law – these are the things America’s looking for. We hope it’ll happen sooner rather than later.

QUESTION: And sooner means a time?

SECRETARY POMPEO: We wish it had happened a decade ago. But frankly, the previous administration and the United States wasn’t prepared to make sure that America was treated fairly. And that’s what the President’s looking for. He’s simply looking for open, free trade. We want that with the Indo-Pacific, we want it with Singapore, with Southeast Asia. It’s an imperative. We are confident that when that happens, the global economy will grow, Southeast Asia’s economy will grow, and America will grow as well.

QUESTION: It’s been close on two months since the Trump-Kim summit here in Singapore. Are we closer to a denuclearization of North Korea?

SECRETARY POMPEO: Oh, of course we are. Of course we’re closer. The two presidents came here and made a historic commitment to each other. Chairman Kim Jong-un made the commitment to denuclearize. That’s consistent with what the UN Security Council has been demanding. There are two resolutions that require North Korea to do just that. America, in return, made commitments. We said we are prepared to improve the relationship between our two countries and offer a brighter future for North Korea. We’re still intent upon that. We’re thrilled that North Korea fulfilled its commitment by beginning the process of returning the remains of American servicemen this past week. We hope that process will continue. And we’re confident that Chairman Kim remains committed to denuclearization. The world is counting on it.

QUESTION: But you’ve also said that it’s been imperative that the various countries still maintain the sanctions on North Korea. If so much progress has been made, why not then scale back on the sanctions?

But that day, that day when we achieve this thing that the whole world is demanding – we welcome that day – a brighter future for the people of North Korea will be at hand.

QUESTION: So you have got nothing to do with sort of a carrot system in which it’s going to be sort of accretionally; you’ll have some sanctions which will scale back as North Korea begins to denuclearize?

SECRETARY POMPEO: The UN Security Council resolutions are very clear. There will surely be things along the way that take place. We’ve already had meetings. We are engaged in things which will improve the trust between our two countries. Those all make sense. But with respect to sanctions, the UN has spoken; the world has spoken.

QUESTION: Time scales. Everybody has – yes, you’re right, everybody’s watching this, but we all want to know: When will this take place? When do you see denuclearization of North Korea taking place? Because having it open-ended just makes everybody incredibly nervous.

SECRETARY POMPEO: Well, the world should be less nervous than they were before the summit between the two leaders, where we were in a very difficult place with frequent missile launches, nuclear testing taking place. None of that has taken place since June 12th. We’re happy about that. The ultimate timeline for denuclearization will be set by Chairman Kim, at least in part. The decision is his. He made a commitment and we’re very hopeful that over the coming weeks and months we can make substantial progress towards that and put the North Korean people on a trajectory towards a brighter future very quickly.

SECRETARY POMPEO: Thank you very much, Lin. It was great to be with you.