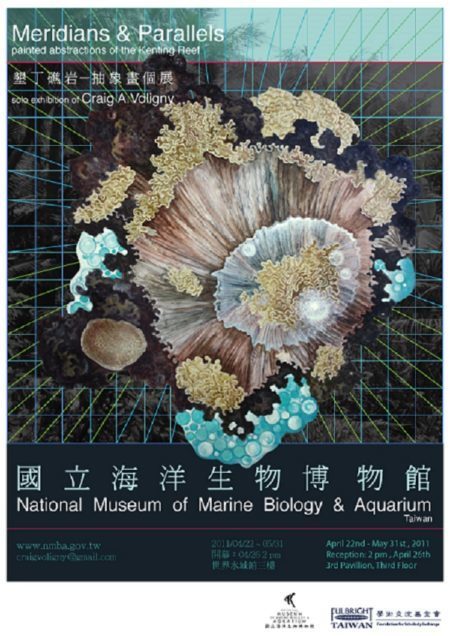 The American Institute in Taiwan congratulates American artist and 2010-2011 Fulbright Program grantee Craig Voligny on his exhibition “Meridians and Parallels: Painted Abstractions of the Kenting Reef,” which will be held at the National Museum of Biology and Aquarium, 3F, 2 Houwan Rd, Checheng, Pingtung, from April 22 to May 31, 2011. The museum will host a special reception in honor of the exhibition on April 26 at 2:00 p.m.

Craig Voligny has spent the past seven months immersed in the Kenting National Park viewing the Kenting Reef up close on land and in the water. This exhibition is the result of that experience. By interpreting the reef conceptually through the basic philosophy of Traditional Chinese Medicine, Voligny has created artworks that represent coral colonies as organs of the reef ecology. His works reference imagery from science diagrams and graphic representations of temperature, water circulation and light distribution related to the reef ecology.

Voligny was born in St. Ignace, Michigan in 1974. He has a B.F.A. from the Columbus College of Art and Design and an M.F.A. from the University of Arkansas. Voligny has been in Taiwan since 2010 through a grant from the Fulbright Program.

The Fulbright Academic Exchange Program was conceived by the late U.S. Senator J. William Fulbright in 1946, aiming to increase mutual understanding and build bridges between the peoples of the United States and the world through international education and exchange. Now 55 years old, Taiwan’s Fulbright Program is among the oldest and most successful programs in the world, having facilitated the exchange of nearly 2,500 scholars from the United States and Taiwan. For more information about Taiwan’s Fulbright Program, please visit http://www.fulbright.org.tw/.

For more information about the exhibition, please visit: http://www.nmmba.gov.tw.