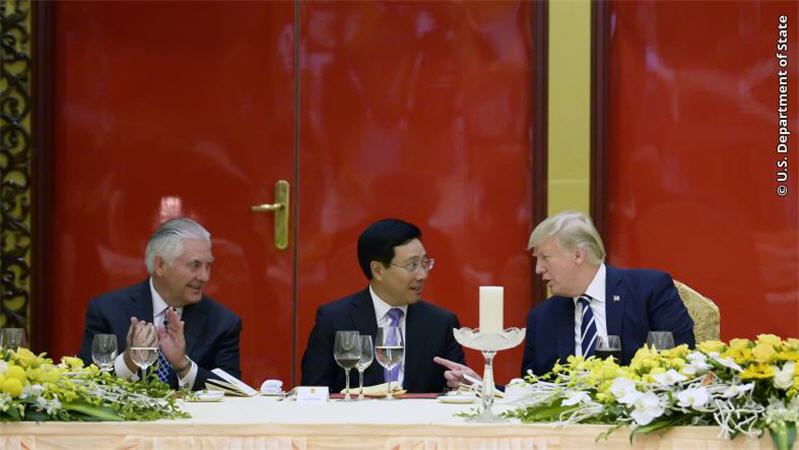 In the first year of the Trump Administration, the United States worked tirelessly with our East Asian and Pacific allies and partners to strengthen cooperation and foster new relationships to address security threats and increase U.S. economic opportunities. As we move forward in 2018, I wanted to take a moment to highlight some of our work and successes of 2017.

In November, the Secretary and I were honored to accompany President Trump on his visit to Asia, his longest overseas trip so far. During his 12-day trip, the President underscored the United States’ commitment to a free and open Indo-Pacific region where sovereign nations may prosper safe from the threat of terrorism, coercion, and nuclear war. The President also reiterated America’s economic commitment to the region and articulated his vision for a fair and reciprocal trade environment that will allow U.S. companies to compete on a level playing field.

During his 5-nation trip that included 3 major international summits, the President met with foreign leaders from around the world to address key issues affecting the United States and our allies by:

This past spring, following an in-depth policy review, the United States initiated a “maximum pressure campaign” of strong diplomatic actions and economic sanctions against North Korea, with the intent of convincing Pyongyang to engage in serious negotiations toward denuclearization. During a special ministerial meeting in April of the United Nations Security Council on the threat to international peace and security posed by DPRK’s unlawful nuclear, ballistic missile and other weapons of mass destruction (WMD) programs, Secretary Tillerson called on UN members to use all measures at their disposal to increase pressure on the North Korean regime.

Over the past year, many of our allies and partners around the world joined the pressure campaign that will deprive the regime of the funding that supports its unlawful nuclear, missile and other WMD programs and send a clear message that the DPRK’s behavior will not be tolerated. Since the Secretary’s remarks in April, more than 20 nations have acted to restrict or end North Korean diplomatic activities. Additional countries have severed all trade ties. At the United Nations, the Security Council unanimously adopted three new resolutions on North Korea this year, each resolution further tightening economic sanctions and imposing unprecedented costs on the regime.  We have now assembled the most formidable international coalition to support and enforce the toughest-ever sanctions regime to maintain international nonproliferation efforts, counter DPRK aggression, and eliminate the threat posed by its nuclear, ballistic missile and other WMD programs.

The State Department joined the July Comprehensive Economic Dialogue, co-chaired by Treasury Secretary Steve Mnuchin and Commerce Secretary Wilbur Ross for the United States and by Vice Premier Wang Yang for China. U.S. participants used the dialogue to press China to provide greater access for U.S. companies and exports and to implement reforms to restore fairness and reciprocity in our unbalanced economic relationship.

The State Department also hosted the Social and Cultural Dialogue in September. Co-Chaired by Secretary Tillerson and Chinese Vice Premier Liu Yandong, this dialogue focused on seven cooperative areas to showcase how ordinary citizens from the United States and China can continue to live together and build a shared future.

4. ASEAN Celebrates its 50th Anniversary and 40 Years of Ties with the United States

Fifty years ago, ten member nations from Southeast Asia created a partnership that became known as the Association of Southeast Asian Nations (ASEAN), which now collectively possesses the fifth-largest economy in the world and is active on a wide range of diplomatic issues of global importance. Forty years ago, the United States built ties with this partnership and has been closely involved with ASEAN ever since. In April, Vice President Pence visited Indonesia and met with the ASEAN Secretary General. In May, Secretary Tillerson hosted a meeting in Washington with his ASEAN Foreign Minister counterparts and in August he traveled to Manila to participate in the ASEAN Regional Forum. Secretary Tillerson and his ASEAN counterparts discussed and worked to improve cooperation on the North Korean threat, maritime disputes in the South China Sea, and transnational issues such as terrorism, cybersecurity, and trafficking in persons. The Secretary also chaired the 10th Lower Mekong Initiative Ministerial Meeting, reaffirming U.S. engagement with a key sub-region within ASEAN. We congratulate ASEAN on its 50th anniversary, and we are looking forward to seeing the United States and ASEAN accomplish even more in the next 50 years.

The United States also deepened our partnerships with the Pacific Islands this year. In September, I led a U.S. interagency delegation that included senior officials from the Department of Defense, the U.S. Coast Guard, and the U.S. Agency for International Development to the Pacific Islands Forum (PIF) in Samoa to identify new avenues of cooperation on regional and global challenges. We emphasized our continued commitment to the security, prosperity, and stability of the Pacific Islands, and Pacific leaders called for even greater partnership with the United States. Pacific Leaders also condemned DPRK’s nuclear provocations, agreed on the importance of full implementation of UNSC sanctions, and, with assistance from Australia and New Zealand, committed to identifying and deregistering illegally flagged DPRK vessels.

In the coming year, we will continue to expand cooperation with Pacific Island countries and like-minded partners to tackle global and regional issues, including promoting sustainable fishing, countering transnational crime, enhancing disaster resilience and response, and strengthening people-to-people ties, particularly with the next generation of Pacific leaders.

As we look forward to 2018, our allies, friends and partners in the East Asia and Pacific can rest assured that the United States will continue to be fully engaged across this vitally important region.

About the Author: Susan A. Thornton serves as Acting Assistant Secretary for the Bureau of East Asian and Pacific Affairs at the U.S. Department of State.

Editor’s Note: This entry also appears in the U.S. Department of State’s publication on Medium.com.