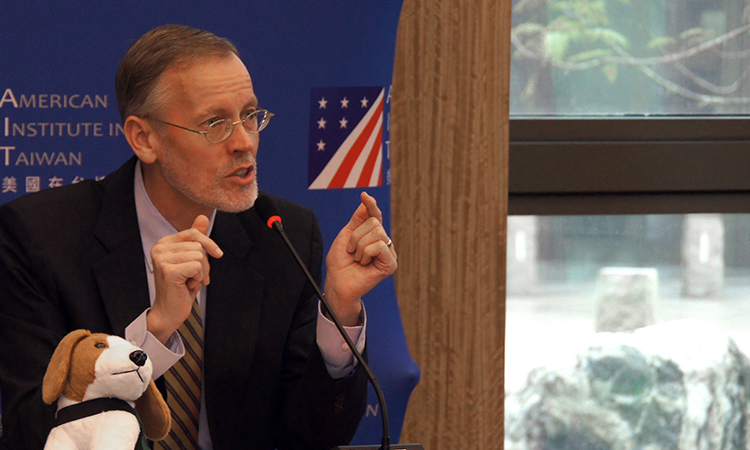 The strength of our people-to-people relationship is perhaps best captured by the story of the special and, perhaps unlikely, friendship between Taiwan Olympic hero CK Yang and U.S. Track and Field Legend Rafer Johnson.

Yang put Taiwan on the map at the height of the Cold War by winning gold medals in the decathlon at the Asian Games in 1954 in Manila and again in 1958 in Tokyo.  As a member of the Ami tribe, he had to overcome many challenges to attend the 1960 Olympics.  Without knowing any English, he moved to California to train at UCLA with Rafer Johnson, the Olympic favorite.  Johnson helped Yang with English, they trained together, and eventually the two became great friends.  They competed against each other in the decathlon event at the 1960 Olympics in Rome, with Johnson winning the gold and Yang the silver.  Yang would later go on to become the world record holder in both the pole vault and the decathlon. Yang and Johnson remained close friends until Yang passed away in 2007.  This longstanding friendship between Yang and Johnson is one example at a personal level of U.S.-Taiwan friendship.

Over the last forty years, this relationship has continued to grow, and I am proud of the work that the United States and Taiwan are doing together to promote even stronger people-to-people ties.

Our People-to-People Ties: Strong and Growing

It is hard to find anyone in Taiwan who doesn’t have relatives or at least friends in the United States, and, on any given day, there are more than 80,000 U.S. citizens here.  The United States is the #1 long-haul destination for Taiwan travelers, and the United States is now the 8th-highest source of tourists to Taiwan, the only country in the top 10 outside of Asia.

I was assigned to AIT for the first time in the 1980s, and I can remember the long visa appointment lines outside of our offices at Hsin Yi Road.  Those days are over.  Today, we have moved to a new $255 million-dollar office in Neihu, and most Taiwan travelers can go to the United States visa-free.  AIT still processes about 34,000 visas each year, and almost half of these are student visas.

Today, Taiwan’s Fulbright Program, managed by the Foundation for Scholarly Exchange and led by Executive Director Randall Nadeau, is one of the largest Fulbright Programs in the world, and AIT is working with the Ministry of Education and the Ministry of Foreign Affairs to provide even more support for this important program.  In addition, Taiwan has committed to expanding English language opportunities for students across the island, and AIT is supporting these efforts through the State Department’s English Language Fellow and English Language Specialist Programs.

I am also pleased to see more and more students from the United States coming to Taiwan to study Mandarin.  Last month, I joined Deputy Foreign Minister Dr. HSU Szu-Chien (徐斯儉) and representatives of Chinese language programs from 12 leading U.S. universities for the opening ceremony of the Chinese Flagship Taiwan Center at National Taiwan University.  Taiwan is an excellent place to study, and we look forward to welcoming more and more U.S. students to Taiwan through the Flagship program and other exchanges, like the National Security Language Initiative for Youth or the Critical Language Scholarship Program.

One of the new people-to-people initiatives that I am most excited about is the Talent Circulation Alliance (https://www.talentcirculationalliance.org/), a new public-private partnership that we launched with Taiwan’s Ministry of Economic Affairs earlier this year.  The goal of the TCA is to cultivate a deep pool of capable, internationally connected, and digitally savvy professionals to advance innovation and prosperity in Taiwan, the United States, and across the Indo Pacific Region.  Vigorous talent circulations in the free and open Indo-Pacific will keep both investment and talent firmly anchored in democratic societies that share values of transparency, rule of law and human rights.

In sum, people-to-people ties between the United States and Taiwan are strong and growing.  We look forward to building on these ties through even more cooperation with our many partners in Taiwan.

Introduction to the Fourth Digital Dialogue

Throughout 2019 and in cooperation with the Taiwan authorities, AIT has been welcoming the thoughts and ideas of Taiwan’s general public through the Digital Dialogue series (https://www.ait.org.tw/ait-at-40/digital-dialogues/).  After my speech today, we will officially launch our fourth Digital Dialogue.  This Dialogue asks the people of Taiwan to respond to the question: “What should the United States and Taiwan do to promote even closer ties between our people?”  To participate, simply go to the AIT website and search for “Digital Dialogues.”  At the end of January, we will hold a special forum to discuss the suggestions we receive.

To close, I would like to underscore the importance of the people-to-people dimension in the U.S.-Taiwan relationship.  People-to-people ties are the connective tissue that binds together the United States and Taiwan.  Bonds are formed through tourism, immigration, marriage, academic and professional exchanges and modern communication technologies that not only keep our people close but also transmit our shared values.  Taken together, these ties, more than any other, are the real foundation for the U.S.-Taiwan relationship.