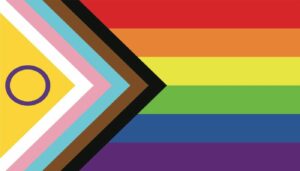 This flag was designed to celebrate diversity and inclusion for everyone in the LGBTQI+ (lesbian, gay, bisexual, transgender, queer, and intersex) community.  It combines elements of the traditional rainbow flag with other LGBTQI+ flags to highlight groups that have sometimes been underrepresented in pride celebrations.

In the 1970s, activists began using the rainbow flag during pride celebrations to represent and celebrate the diversity of the LGBTQI+ community.

In 1999, an activist designed this transgender pride flag.  Light blue represents boys, pink represents girls, and white represents those who are transitioning, feel they have a neutral gender or no gender, or are intersex.

In 2013, an activist designed the intersex flag using yellow and purple to contrast with blue and pink, which have traditionally been seen as binary, gendered colors.  The unbroken circle represents being whole.

In 2017, the city of Philadelphia added black and brown stripes to the rainbow flag to highlight inclusion of LGBTQI+ people of color.

In 2018, the “pride progress flag” added black, brown, light blue, pink, and white triangle stripes to advocate for progress while highlighting inclusion of transgender and LGBTQI+ people of color.