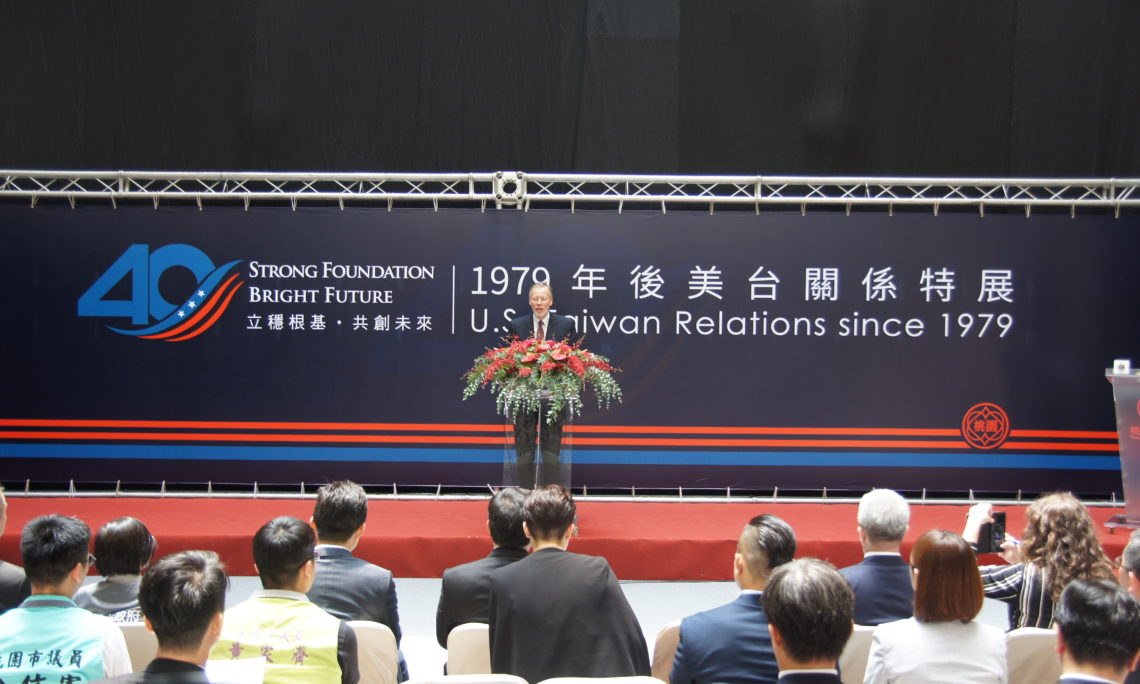 Mayor Cheng, Deputy Minister Hsu, distinguished guests, ladies and gentlemen – good morning!  It is a great pleasure for me to be here today to kick off the American Institute in Taiwan’s 40th anniversary – or AIT@40 – celebration in Taoyuan.  I would like to express my sincere thanks to the Taoyuan City Government for hosting this event, and for receiving our AIT@40 exhibition.  As everyone may know, AIT has been commemorating our 40th anniversary with a year-long campaign of events across Taiwan, with each month recognizing a different aspect of the multifaceted nature of U.S.-Taiwan relations.  August is Security Cooperation Month.

When I assumed my position as Director of the American Institute in Taiwan just over one year ago, I named “promoting security cooperation” as the first of my “four promotes” （四個增進）– the priorities I hope to focus on during my tenure as AIT Director.  Thus, it is very fitting that we launch this AIT@40 exhibition and our Security Cooperation Month here in Taoyuan, where just a short distance away, the American and Taiwan Air Forces enjoyed a long and storied history of security cooperation and military exchanges.  As AIT Director, a former Air Force officer, and lao pengyou of Taiwan, I am proud and honored to share with you today our security cooperation milestones, the wide-ranging aspects of our cooperation, and my vision of how AIT will continue to expand this security cooperation with Taiwan.

Any discussion of today’s U.S.-Taiwan security cooperation relationship would be incomplete without first mentioning a brief history of the Taiwan Relations Act.  The roots of U.S.-Taiwan security cooperation actually extend back decades before the act was passed in 1979.  When President Jimmy Carter announced on December 15, 1978 that the United States would establish diplomatic ties with the People’s Republic of China on January 1, 1979, Congress leapt into action and, recognizing our past commitments and history with Taiwan, sought to codify the U.S.-Taiwan relationship into law.  Congress was especially concerned about Taiwan’s security, and the ensuing congressional debate focused on how to best ensure that Taiwan’s future would be resolved peacefully.  The resulting Taiwan Relations Act, passed with broad bipartisan support, was a landmark piece of legislation that cemented a policy of continued support for Taiwan’s self-defense.  I should point out that the U.S.-Taiwan relationship still enjoys broad bipartisan support in Congress.

If there is any question about the purpose of the Taiwan Relations Act, one need only look at the first lines of the preamble, which reads that it is an “act to help maintain peace, security, and stability in the Western Pacific.”  The act goes on to state that the United States would provide “such defense articles and defense services in such quantity as may be necessary to enable Taiwan to maintain a sufficient self-defense capability.”  Congress made clear that the United States would consider “any effort to determine the future of Taiwan by other than peaceful means” not only a threat to Taiwan but also, I would quote, “a threat to the peace and security of the Western Pacific and of grave concern to the United States.”

This foundational statement has enabled the United States to sustain a policy of regular arms sales to Taiwan through seven administrations, including this one.  Arms sales remain an important component of our security cooperation relationship with Taiwan, and our day-to-day work with the Taiwan authorities has focused on making sure Taiwan seeks the right capabilities to resist coercion. Since 2008, U.S. administrations have notified Congress of more than $24 billion in foreign military sales to Taiwan, including just in the past two months the sale of M1A2 tanks and Stinger missiles, valued at $2.2 billion dollars.  To date, this administration alone has notified Congress of $4.4 billion in arms sales to Taiwan.

These investments by Taiwan are commendable, as is Taiwan’s ongoing commitment to increase the defense budget annually to ensure that Taiwan’s spending is sufficient to provide for its own self-defense needs.  And we anticipate that these figures will continue to grow commensurate with the threats Taiwan faces.

The genius of the Taiwan Relations Act or TRA was that it recognized it could not cover all aspects of security cooperation, so the drafters inserted a degree of flexibility in how the U.S. government could maintain “our capacity to resist any resort to force or other forms of coercion that would jeopardize the security, or social or economic system of the people on Taiwan.”  In other words, Congress may not have envisioned all the threats to Taiwan when the TRA was drafted, but the provisions of this legislation have enabled the United States to respond accordingly.  That the TRA has allowed us to respond to the dynamic security situation in the Taiwan Strait over the past 40 years has validated the durability of this law.  Subsequent pieces of legislation passed by Congress have only reinforced U.S. resolve to support Taiwan’s ability to defend itself.

Our Indo-Pacific Vision:  From Security Cooperation to Security Partnership

Today, Taiwan is facing new and emerging threats, in addition to traditional military ones.  In the past few years, we have witnessed an increase in harsh rhetoric, military incursions and island encirclement flights, and the emergence of aggressive disinformation and cyber attacks – all aimed at undermining Taiwan’s democracy.  Combined, this pressure, subversion, and intimidation represent threats both to Taiwan and to the peaceful and secure regional order that is an integral part of U.S. foreign policy.

While one side flouts international norms, the other strives to be a responsible stakeholder.  That is why Taiwan figures prominently as part of the U.S. government’s vision for a free and open Indo-Pacific.  Our Indo-Pacific vision has three interlocking pillars: security, good governance, and economic prosperity.  In terms of security, the State Department has articulated that “the United States is deepening cooperation across the Indo-Pacific to confront common threats, protect shared resources, and uphold sovereignty,” while the Defense Department’s Indo-Pacific Strategy Report has explicitly identified Taiwan as “a reliable, capable, and natural partner of the United States.”  This report expressly calls for “strengthening partnership” with Taiwan – which is exactly what AIT does everyday.  Our engagement aims to ensure that Taiwan remains secure, confident, free from coercion, and able to peacefully and productively engage the mainland on its own terms.

When we talk about our security relationship with Taiwan, most people think about arms sales; but what is equally worth highlighting is the depth and breadth of exchanges between our two militaries.  The U.S. Army, Navy, Air Force, and Marine Corps frequently participate in exchanges with Taiwan counterparts, not only learning from one another, but also building friendships and bonds that can only be shared by those in the armed services.  Taiwan alumni from our various U.S. military service staff colleges and training programs number in the hundreds, and distinguished graduates include former defense ministers, chiefs of general staff, and frontline unit commanders and senior staff officers.

Taiwan’s cadets and midshipmen attend our premier military academies at West Point, Annapolis, and Colorado Springs.  That we welcome Taiwan to attend these institutions – the crown jewels of the U.S. military education system – is a testament to our close relationship.  I want to stress that these academies are leadership institutions designed to build leaders of character.  It is no surprise that service academy graduates in the United States have risen to the highest ranks in the U.S. government, including several past presidents and, notably, our current Secretary of State and Secretary of Defense.

In Taiwan, it is inspiring to see young men and women voluntarily sign up to serve and lead soldiers, sailors, airmen, and marines against a potential adversary with a population over sixty times Taiwan’s size.  They deserve our heartfelt admiration and respect as they continue to answer the call of service to protect and defend Taiwan’s democracy and all that it stands for.

In just over a year as AIT Director, I have been immensely impressed with not only the Taiwan leadership’s steadfast resolve in ensuring its own self-defense, but also the wide-ranging aspects of our security cooperation relationship that extend beyond defense.  Taiwan boasts a world-class capability in humanitarian assistance and disaster response (HADR) to respond to natural and man-made disasters.  AIT has been proud to jointly host several workshops, including two under our Global Cooperation and Training Framework (GCTF), to train third country practitioners from across the Indo-Pacific region on best practices on HADR.

In addition to training third country counterparts on disaster response, Taiwan also has an impressive record of generously deploying robust relief efforts to countries in need, demonstrating its willingness to be a constructive partner and leader in the Indo-Pacific region.  And as we know, this is just one example of the many ways in which Taiwan eagerly and capably contributes to international efforts to address global challenges.  As the effects of climate change result in natural disasters becoming more and more commonplace and intense, rapid and efficient response mechanisms are especially important.  The best practices and lessons learned from Taiwan’s experience will benefit us all.

Having detailed a brief history and description of our security cooperation relationship over the past 40 years, and the ways in which we are adapting our cooperation to respond to today’s most pressing security challenges, I am confident in Taiwan’s ability and commitment to continue expanding this relationship.  A new initiative that I am pleased to publicly announce today is the launch of our Indo-Pacific Security Fellows program.  AIT has identified a cohort of outstanding mid-level civilian and military individuals who have demonstrated the potential for leadership in the U.S.-Taiwan security relationship.  This inaugural class of Indo-Pacific Security Fellows hails from a number of different organizations and we look forward to helping them enhance their leadership abilities and expertise on regional security issues.

As part of this Security Cooperation Month, AIT also welcomes the thoughts and ideas of Taiwan’s general public to inform us as we carry on our security cooperation relationship.  After my speech today, we will officially launch our third Digital Dialogue.  In collaboration with the Taiwan authorities, and thanks to on-line applications that combine artificial intelligence with the wisdom of the crowd, this Digital Dialogue asks the people of Taiwan to respond to the question: How should the United States and Taiwan deepen their security cooperation relationship against the backdrop of cross-Strait tensions, U.S-China friction, new and emerging threats, and an increasingly complex Indo-Pacific regional security environment?  We welcome your participation and value your frank and candid thoughts.  Two months from now, we will aggregate responses and share in a public discussion forum your various thoughts on how you think we can promote security cooperation.  To participate, simply go to the AIT website and search for “Digital Dialogues.”  Please spread the word!

In closing, I would like to emphasize that the U.S.-Taiwan security cooperation relationship – and our relationship writ large – is grounded in our fundamental shared values of human rights, freedom and democracy.  We are and will remain a true friend of Taiwan, and our commitment to the obligations enshrined in the Taiwan Relations Act is rock solid.