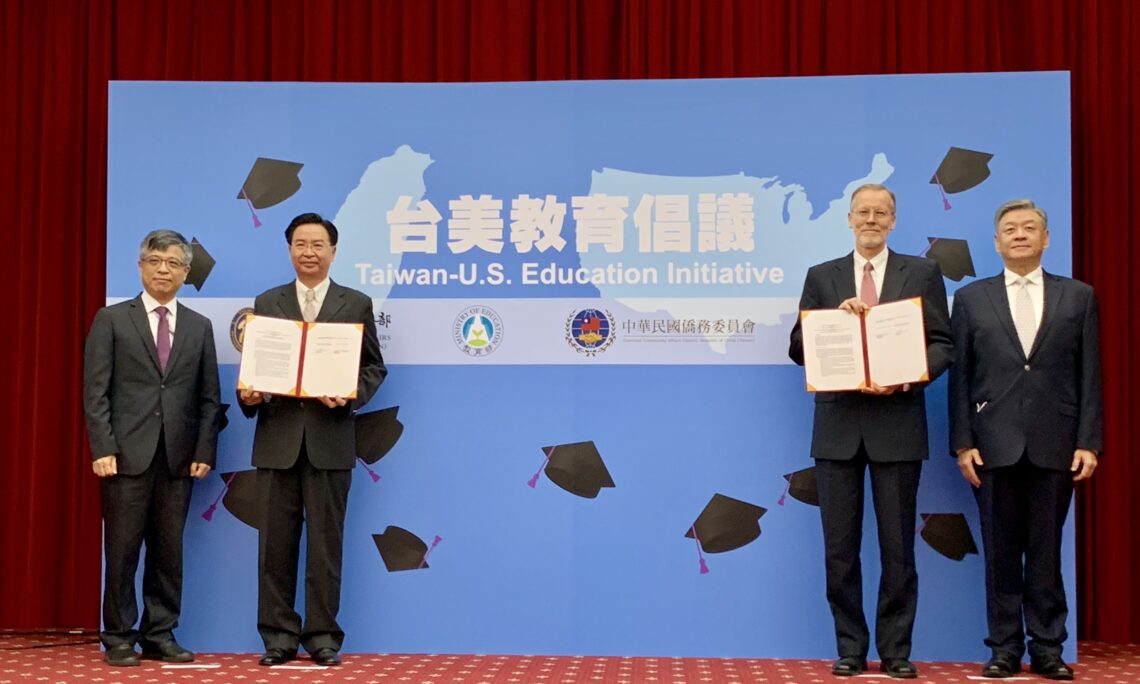 Facilitated by the American Institute in Taiwan (AIT) and the Taipei Economic and Cultural Representative Office (TECRO), the United States and Taiwan held a series of events this week to launch the U.S.-Taiwan Education Initiative.  This new initiative is aimed at expanding access to Mandarin and English language instruction, while safeguarding academic freedom.  Specifically, the Initiative will highlight and enhance Taiwan’s role in providing Mandarin instruction to Americans and to people around the world.

On December 2, U.S. Deputy Secretary for Education Mitchell Zais convened a virtual meeting organized under the auspices of the AIT and TECRO to explore specific areas of cooperation.  The U.S. delegation included representatives from the Departments of State and Education.  Dr. Szu-chien Hsu, Deputy Secretary-General of the Taiwan National Security Council, headed the delegation from Taiwan.

On December 2, AIT and TECRO signed a Memorandum of Understanding (MOU) on international education cooperation.  The MOU is expected to enhance and expand existing Mandarin and English language opportunities in the United States and on Taiwan.  The MOU also encourages the exploration of opportunities for Mandarin and English language teachers and resources to be deployed to language programs at U.S. universities and Taiwan educational institutions, and facilitates greater exchange between U.S. and Taiwan institutions on best practices.

The U.S.-Taiwan Education Initiative is set against the backdrop of two distinct but related trends. First, universities around the world, including many in the United States, have been closing Confucius Institutes because of their role in censorship and malign influence campaigns by the People’s Republic of China (PRC).  This shuttering of Confucius Institutes, however, has not dampened interest in Mandarin language learning, which remains strong among American and international students.  Taiwan can play a key role in addressing that interest.

Second, Taiwan has at the same time increased its investment in English language instruction in the hopes of internationalizing both its student body and its workforce.  President Tsai has announced a goal of making Taiwan completely bilingual by 2030.  Doing so would mean that Taiwan’s students and young talent who wish to gain experience outside of Taiwan would have expanded options.  The United States is eager to help provide English language instruction in the furtherance of this goal.

These two trends are both rooted in the same principle: young people should be able to pursue academic and professional opportunities in an environment free from coercion and censorship.  This Initiative will provide a platform for expanded U.S.-Taiwan cooperation in pursuing both our shared interests and our shared values.