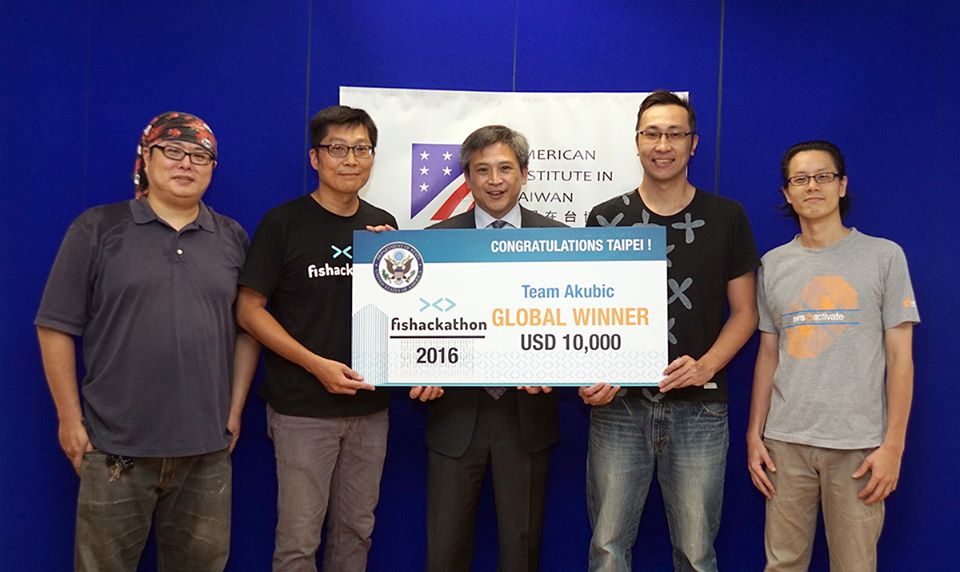 The Secretary’s Office of Global Partnerships at the U.S. Department of State announced on World Oceans Day that the global winner of the third annual Fishackathon was Team Akubic, from Taiwan. The team will receive a $10,000 cash prize from Virgin Group for their solution, Great Lakes Savior.

Organized by the Secretary’s Office of Global Partnerships, Fishackathon is a public-private partnership that brings together the U.S. government with the private sector and civil society to answer Secretary Kerry’s call in saving our ocean. The event—which leads up to the U.S. Department of State’s annual Our Ocean conference taking place this year on September 15th and 16th—called on coders, designers, conservation organizations, and science enthusiasts from all around the world to come together over Earth Day weekend, April 22nd-24th, to create new applications and tools to address issues facing the world’s oceans and fisheries.

With the participation of coders, aquariums, tech hubs, and universities in over 40 host cities around the world, this year’s Fishackathon has grown from its first iteration in 2014, which brought together coders in 5 domestic cities. After a weekend of coding, each host city in this year’s Fishackathon selected its local winner, resulting in 40 teams competing for the $10,000 cash prize.

This year’s global judging team, comprised of a panel of technology and fisheries experts, evaluated teams’ proposed solutions based on innovation, the interface, and the solution’s potential impact in addressing challenges facing the future of oceans and fisheries. Each solution addressed at least one of nine problem statements, identified by various NGOs and experts from around the world. Problem statements revolved around themes such as: fish identification, lost fishing gear, aquatic invasive species, and compliance with local fishing laws. Team Akubic addressed a problem statement submitted by Fisheries and Oceans Canada: aquatic invasive species, specifically Asian Carp, present a major ecological and economic threat to the Great Lakes. Team Akubic’s solution seeks to control populations of this invasive species by using online real-time temperature and flow data to predict spawning times of Asian carp in the Great Lakes region.

The Secretary’s Office of Global Partnerships and U.S. Department of State congratulate Team Akubic and thank all partners, participants, and supporters of this year’s Fishackathon.