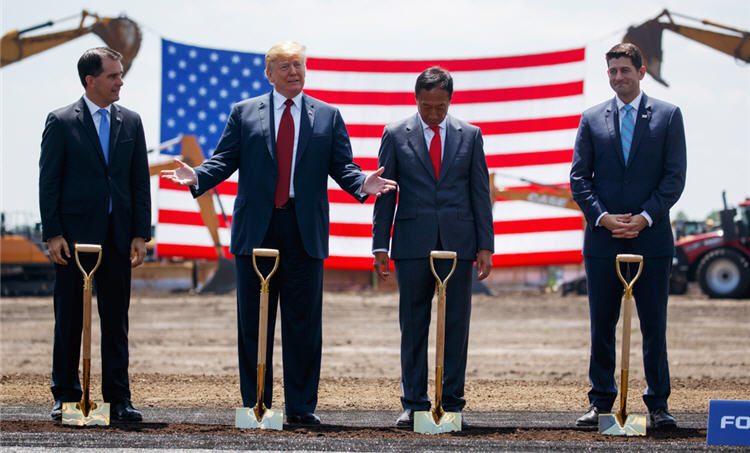 By Christopher Connell at ShareAmerica
Jul 17, 2018

When a Dutch company scouted the United States for places to build ultra-modern facilities to store foods at sub-zero temperatures, it found very warm receptions from governors’ offices right down to the municipal inspectors who issue building permits.

“People really embraced the opportunity to work with us,” says Jonas Swarttouw, U.S. operations manager for NewCold Advanced Cold Logistics of the Netherlands, which has a $90 million storage warehouse up and running in Tacoma, Washington, and a second slated for Burley, Idaho.

NewCold uses robots to rapidly store and retrieve tens of thousands of pallets, but also has hired more than 50 forklift drivers, mechanics and others.

“What brought us here is the scale of the U.S. market and the amount of opportunities … for not just one [facility] but potentially tens more,” Swarttouw said at the SelectUSA Investment Summit, where Idaho Governor C.L. “Butch” Otter joined him in announcing NewCold’s second site.

Otter was among nine state governors, the governor of Puerto Rico and five members of President Trump’s Cabinet who addressed 3,000 summit participants, including 1,200 foreign business representatives and investors, at the U.S. Commerce Department–sponsored summit. It was held June 20–22 in Washington.

Economic development agencies from every state and many cities were also there to woo new investors.

The high-level attention and courtship reflects how eager the United States, already the world leader in attracting foreign direct investment, is to welcome more.

Otter, former president of J.R. Simplot Company, an international food producer, is an avid pitchman. “In Idaho, we move at the speed of business,” he says. “I’ve got companies from all over the world coming to me.”

In the United States, he adds, companies can break into the marketplace “cheaper and faster … than anyplace else.”

Commerce Secretary Wilbur Ross announced $600 million in deals that will create 650 jobs. He said since the first summit in 2013, attendees have invested nearly $93 billion and created 140,000 jobs.

With the economy strong and corporate taxes reduced, “there’s never been a better time to invest and grow your business in America,” Treasury Secretary Steven Mnuchin said.

Ravi Kumar, president of Infosys, a global tech-consulting firm based in India, said his company is creating 10,000 U.S. jobs as it seeks to move closer to its customers. “We need to work alongside them to co-create and co-innovate,” he said.

“It wouldn’t have been possible without the collaboration of the governor,” he said. “Now we have a prospering plant, employing 1,500 already, and we are going to employ many, many more going forward.”

Foxconn, a Taiwanese electronics manufacturer, is investing $10 billion in a factory in a suburb of Racine, Wisconsin, expected to hire 13,000. At the June 28 groundbreaking, President Trump said, “As Foxconn has discovered, there is no better place to build, hire and grow than right here in the United States.”