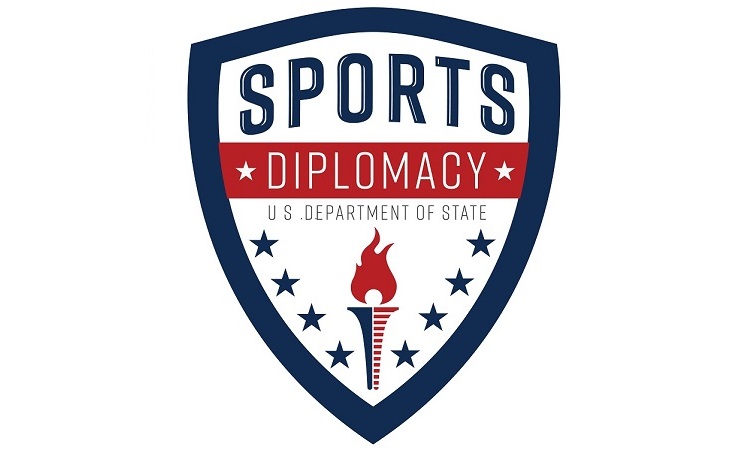 The Office of Sports Diplomacy in the Bureau of Educational and Cultural Affairs at the U.S. Department of State

This program is a part of the American Institute in Taiwan’s (AIT) yearlong AIT@40 campaign, celebrating forty years of U.S.-Taiwan friendship and cooperation since the signing of the Taiwan Relations Act.  Each month of 2019 features a unique theme, highlighting the multifaceted nature of U.S.-Taiwan relationship.

Warlick and Jue will be involved in a variety of activities around Taipei and Kaohsiung, including workshops, discussions, and basketball clinics focusing on strengthening women’s leadership in sports, fostering youth development, and empowering women and girls.  The two sports envoys will also be guests of honor at the Buddha’s Light International Association (BLIA) Cup University Basketball Tournament at the Kaohsiung Arena.  This year’s tournament will feature teams from Australia, Canada, China, Japan, New Zealand, the Philippines, Taiwan, and the United States.

During their visit to Taiwan, the two sports envoys will participate in two public lectures.  AIT welcomes interested members of the public to attend.

Holly Warlick is the former head coach of the Tennessee Lady Volunteers (2012-2019), where she achieved a 172-67 career record (.720).  Eleven Tennessee players under Warlick’s tutelage were accepted in the WNBA Draft, including two first round picks.  Under her watch, there were 15 Southeastern Conference (SEC) Academic Honor Roll members, including one Academic All-American.

Warlick also played point guard for the University of Tennessee from 1976-1980.  In 1979, she was a member of the U.S. women’s team at the R. William Jones Cup international basketball competition in Taipei that won all six games en route to the gold medal.  In 1980, at the end of her college basketball career, Warlick was the first player in the history of Tennessee athletics (male or female) to have her jersey (No. 22) retired.

Warlick became a member of the 1980 U.S. Olympic basketball team and played in the Pan American Games and World Championship competitions.  She was also a Women’s Professional Basketball League (WPBL) All-Star and led the Nebraska Wranglers to a WPBL championship in 1981.  The Knoxville native was labeled the “best player in the South” and enshrined in a number of Halls of Fame, including the University of Tennessee Lady Vol Hall of Fame, the Women’s Basketball Hall of Fame, and the Knoxville Sports Hall of Fame.  She was also named to the CONVERSE/Lady Vol Team of the Decade for the 1980s.

In recognition of her status as a former Olympian, Warlick earned the honor of running the Olympic torch through Knoxville as it made its way to the 1996 Olympic Games in Atlanta.  In 2015, Warlick was selected to be the assistant coach of the USA team at the World University Games in Seoul, South Korea.  The team won all six games, including the championship game against Canada.  She is regarded as the most prolific basketball player ever to come out of the University of Tennessee.

Carol Jung Jue (關張綺君) has been Chapman University head women’s basketball coach for over 16 years.  Under her guidance, the Panthers have been considered amongst the elite programs in the West Region.  Since 2003, Jue has led Chapman to a winning record every year, including nine NCAA Division III playoff berths and nine 20-win seasons.  Now, with an overall record of 300-plus wins into Jue’s Chapman tenure, her teams have won over 70 percent of their games.  She has coached four All-West Region selections, three Academic All-Americans, six Academic All-District honorees and two earned Southern California Intercollegiate Athletic Conference (SCIAC) Athletes of the Year.  She has earned SCIAC Coaching Staff of the Year honors in 2015-16, 2016-17 and 2017-18.  Under Jue’s leadership, the Panthers have traveled to Taiwan to participate in both the Jones Cup (2010) and the BLIA Tournament (2015).

Carol Jue is the only Chinese-American head basketball coach in the NCAA.  She played collegiately at both Cal State Los Angeles and Claremont-Mudd-Scripps, and was selected team MVP and named to the All-SCIAC team while playing at Claremont from 1991-92.  Jue was born in Hong Kong, but her parents immigrated to East Los Angeles, California when she was 3 months old.  She and her husband Kevin currently reside in Orange, California with their sons Ryley and Carson.

About the Office of Sports Diplomacy at the U.S. Department of State

The Office of Sports Diplomacy in the Bureau of Educational and Cultural Affairs at the U.S. Department of State uses sports exchanges to increase dialogue and cultural understanding between people around the world. The use of sports as a platform exposes international participants to American culture while providing them with an opportunity to establish links with U.S. sports professionals and peers. In turn, Americans learn about other cultures and the challenges young people face today.  The Office of Sports Diplomacy manages the Sports Envoy Program, working in cooperation with the U.S. Olympic Committee, U.S. sports federations, and professional leagues.