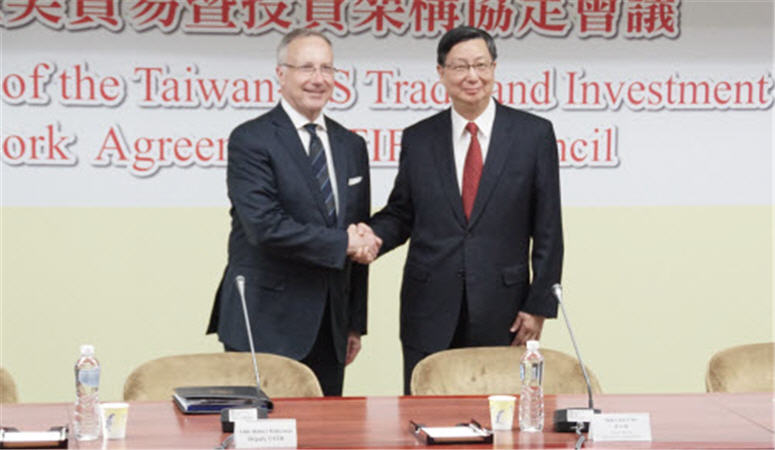 Taipei, Taiwan – U.S. and Taiwan trade authorities concluded the ninth Trade and Investment Framework Agreement (TIFA) Council meeting under the auspices of the American Institute in Taiwan (AIT) and the Taipei Economic and Cultural Representative Office in the United States (TECRO). Ambassador Robert Holleyman, Deputy United States Trade Representative, and Cho Shih-Chao, Taiwan’s Deputy Minister of Economic Affairs, co-led the discussions to enhance the longstanding trade and investment relationship between the United States and Taiwan. Other participants included AIT and the U.S. Departments of State, Agriculture, and Commerce.

The U.S.-Taiwan TIFA is the key mechanism for trade dialogue between the United States and Taiwan authorities and covers the broad range of trade and investment issues important to U.S. and Taiwan stakeholders. The United States welcomed the concrete steps Taiwan authorities took in the months following the 2014 TIFA to improve trade secrets protection, follow through on important 2014 TIFA commitments related to pharmaceuticals, address regulatory complexities for the registration of chemical substances, and relax restrictions on offshore data centers for financial institutions.

The United States welcomed Taiwan’s announcement of steps to improve the protection and enforcement of intellectual property, including by increasing human and financial resources for Taiwan’s IPR enforcement authorities, addressing piracy occurring in and around university campuses, and taking steps to foster innovation in the pharmaceutical sector. The United States and Taiwan also agreed to continue fully utilizing the Investment Working Group for dialogue on a robust set of priority investment issues to improve Taiwan’s investment climate and look forward to deepening cooperation on trade secrets protection. The two sides recognized the need for further engagement on improving the time-to-market of medical devices, including streamlining regulatory approvals. The TBT Working Group also yielded important progress on reducing regulatory obstacles in the chemical registration process. The United States and Taiwan held in-depth discussions on a range of agricultural issues and agreed that more must be done to secure meaningful progress on these issues. Taiwan also provided updates on its regional and multilateral initiatives and highlighted its close cooperation on various initiatives in APEC and the WTO.

The United States and Taiwan have a long-standing and vibrant trade relationship. Taiwan is our 10th largest goods trading partner and a top-10 destination for U.S. agricultural and food exports. U.S. goods and services trade with Taiwan totaled an estimated $88 billion in 2014. The TIFA, signed in 1994, provides the primary mechanism for trade dialogue between the United States and Taiwan authorities to expand trade and investment links and deepen cooperation.