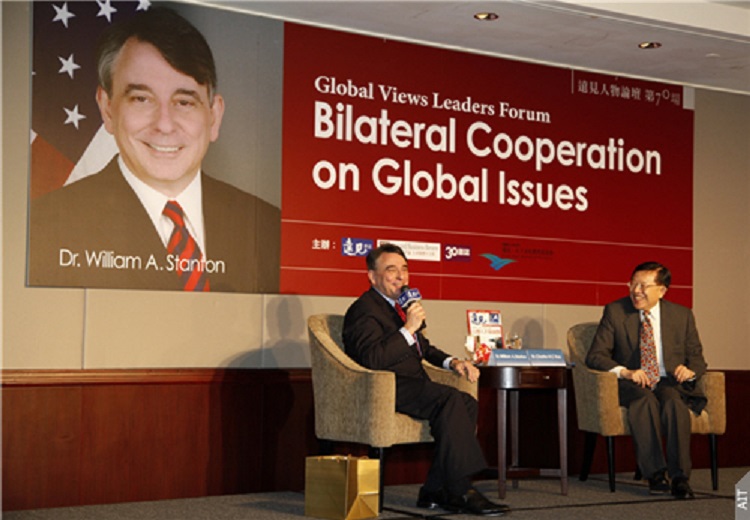 I would like to thank Commonwealth Publishing Group Founder and Chairman Professor Charles Kao for the opportunity to speak on the important, but seldom noted, topic of U.S.-Taiwan cooperation on global issues.

It is impossible to divorce the concept of “global issues” from globalization itself.

Whether it’s the more than 200 Starbucks in Taiwan, or Taiwan’s 85 Degrees Café in Irvine, California, the process of globalization is evident all around us.

When I joined the Foreign Service nearly 32 years ago, we used electric typewriters.  Long distance phone calls were very expensive, and diplomats sometimes could deliver news to Washington before the media did.  Nowadays of course, my daughters could not imagine living without persona laptop computers, cell phones, iPods, and cable television.

Twenty-three years ago, if you were assigned to Beijing, you received a consumable allowance to ship household supplies unavailable there, but now you can even buy luxury designer fashions in Beijing.

Nevertheless, we should not be surprised that, as history moves forward, we will encounter new challenges.  On the one hand, we reap the benefits of conquering time and space that our new technologies make possible.  On the other hand, as we continue to develop and grow, there is a certain toll exacted by our development.

Improved transportation, for example, has increased air pollution, increased the rise of pandemic disease, and the spread of international crime and narcotics.

There are new challenges that arise, which are not of one group or one country’s making, but are instead attributable to all of us, and thus require all of us to work together to meet them.

Now when people in Taiwan and America ordinarily talk about our relationship, our trade and security cooperation receive the majority of attention.  Judging by column inches in local media, one would think our relationship consisted of little more than steak and weapons.

Obviously, trade is a major component of the U.S.-Taiwan relationship.  Taiwan is a major trading partner for us; bigger than India, Italy, Spain, or Singapore.  In 2009, Taiwan was our tenth-largest economic partner.

Our security ties are also an obvious manifestation of our friendship.  Beyond the $6.4 billion arms package that was announced in January, we also have frequent consultations, working-level exchanges of technical experts, and training programs.  Taiwan’s military, for example, sends an average of 400 students to the U.S. for training each year.

But our relationship is about much more than trade and security.  As advanced market economies, democracies, responsible global citizens, and longstanding friends, the U.S. and Taiwan have numerous shared values and common concerns.

As a result, our bilateral cooperation also encompasses many of the greatest challenges our world faces.  Through our cooperation, we have the opportunity to make important contributions to the entire world.

So today I want to talk about how Taiwan and the United States are cooperating to meet global challenges.  Let me touch briefly on just four areas: health, the environment, disaster management, and science and technology, and give you some examples of where we are and where we might be headed.

First of all, health, an area in which close personal and professional ties between U.S. and Taiwan health authorities have facilitated communication where political obstacles might otherwise stand in the way of Taiwan’s access to the latest in global health information.

For instance, just last week, U.S. experts from the Centers for Disease Control came to Taiwan to share technical expertise on vaccine development, pharmaco-epidemiology, and risk communication, via lectures and consultations with National Cheng Kung University.

To help address the threat of H1N1, the U.S. provided a virus sample to Taiwan in 2009, which was used to develop and produce your own H1N1 vaccine.

In response to the global scourge of AIDS, AIT has been working to facilitate training opportunities between the U.S. Department of Health and Human Services and the Taiwan Centers for Disease Control (CDC) on managing HIV/AIDS cases.  This cooperation is aimed at building capacity among Taiwan health workers to provide social work, consultation services, and screening for HIV-positive individuals.

U.S. CDC also assisted Taiwan in implementing the Directly Observed Treatment Program to reinforce compliance for TB patients.  Thanks to this program, Taiwan has been able to better control multiple drug resistant tuberculosis.

Examples of environmental projects already implemented under the agreement include:

In 2009, Taiwan funding for these and similar projects, which were implemented by U.S. experts, amounted to over half a million U.S. dollars.

Benefits of our environmental cooperation accrue to the U.S., Taiwan, and beyond.

For instance, the Emission Trading Training Program transfers U.S. EPA’s experiences in emissions trading to Taiwan in order to achieve emissions reductions here, and create a model that can be shared with others in the region.

The benefits of our Ocean Pollution Prevention cooperation include improving the marine environment, reducing pollution caused by marine disasters in Taiwan and the immediate region, and protecting coastline habitats of the Pacific Ocean, as well as the quality and safety of seafood.

The U.S. believes that Taiwan’s environmental expertise, gained in good measure through our long cooperation, presents an opportunity for Taiwan to become an environmental leader and facilitator in advancing environmental protection efforts regionally.

For example, U.S. EPA is interested in helping Taiwan expand to a regional level its Soil Remediation Conference and training workshop, scheduled for October, which could serve as a pilot program for Taiwan to take a leadership role in advancing regional environmental protection.

Science tells us that, unfortunately, global warming will likely intensify natural disasters like typhoons as well as the damage they cause.  As we’ve seen recently in Haiti, Chile, and elsewhere, local earthquakes have become calls for global action to improve disaster preparedness and response.

Seven and a half months ago, Typhoon Morakot brought record-breaking accumulated rainfall to Taiwan (2,900 mm, or 114 inches, in 3 days), the worst flooding in 50 years, billions of NTD in damage, and the loss of hundreds of lives.  I remember watching from the U.S. images of suffering and acts of bravery and kindness as Taiwan and the world reached out to the victims.

Many here today could cite examples of U.S. aid and cooperation during Morakot, but our collaboration goes much further than the material assistance and helicopters reported in the press.

On May 6-7, Taiwan will host a U.S.-Taiwan workshop on Mega-City/Mega-Disaster Cooperation, which could lead to significant advances in building and infrastructure resilience, and promote strategies for disaster reduction in emergency response, recovery, and rebuilding.

Even as we speak today, Lt. General (Ret.) John Goodman, Director of the Center for Excellence in Disaster Management and Humanitarian Assistance, under the United States Pacific Command, is meeting with an interagency group here in Taipei to learn about Taiwan’s emergency management system.

Taiwan has also strongly supported in APEC U.S. projects on disaster preparedness, and Taiwan’s excellent work in APEC’s Task Force for Emergency Preparedness has shown that continued cooperation on disaster management will benefit the U.S., Taiwan, and the entire global community.

Effectively responding to global issues like HIV/AIDS and climate change requires hard work, and many of these issues are likely to have solutions rooted in scientific and technological innovation.

Fortunately, the U.S. and Taiwan are both home to highly innovative, knowledge-based societies.  The World Economic Forum’s “Global Competitiveness Report 2009-2010” ranked Taiwan #6 in “Capacity to Innovate,” and the U.S. #1.

Leveraging our strengths, in areas such as high-tech research and manufacturing, is already paying dividends.   I recently attended a ground breaking ceremony for Taiwan’s Pihsiang Machinery Manufacturing Company, which is building an electric automobile production facility in the Su’ao Harbor Free Trade Zone.  Interestingly, the cutting-edge batteries that Pihsiang’s produces were patented, in part, by the University of Texas.  This is another example of how our science, technological, and business links have the potential to bring global benefits.

As the entire world works to reduce greenhouse gas emissions, cooperation between green energy innovators in the private sector is likely to play an important role in producing the products and services that will create a greener, cleaner world.  The U.S. and Taiwan are, in many ways, natural and complementary partners in fields of science and technology, such as green energy.

Some notable U.S.-Taiwan projects include:

FORMOSAT/COSMIC Missions.  This space cooperation program has been called “the most accurate earth thermometer in space.”  Over 1,000 users from 50 countries access FORMOSAT data each and every day for applications in weather prediction, climate research, and space weather studies.

Atacama Large Millimeter/submillimeter Array (ALMA).  Taiwan is participating along with the U.S. to provide key components to ALMA, which is the largest astronomical project in existence.  When it becomes operational at the end of 2012, ALMA will give us images 10 times sharper than those of the Hubble Space Telescope.

Marine Research.  The U.S. and Taiwan have been working together closely for years to study ocean phenomenon.  An upcoming project between the U.S. Office of Naval Research and Taiwan researchers will help scientists better understand the formation and evolution of typhoons.

As our economies move into new areas of development, such as green energy, we should not be surprised to learn that the U.S. and Taiwan are increasing cooperation in these fields.  In fact, within the last few months, Taiwan’s National Science Council and the U.S. Department of Energy have been exploring new collaboration in the area of energy technologies.

In light of our strong foundations in science and technology, our innovative and entrepreneurial people, and official support for developing green industries and cutting greenhouse gas emissions, I would not be surprised to see U.S.-Taiwan cooperation in the future yield important scientific and technological progress in solar energy, wind power on land and sea, biofuels, ocean current energy, and the capture and storage of carbon emissions technology.

Education is the Foundation

The success of U.S.-Taiwan cooperation on global issues is in large part due to the personal and professional connections among U.S. and Taiwan scientists, academics, and businesspeople.

Thanks to these connections, Taiwan, just in the last month, has hosted U.S. visitors from such agencies as the Department of Energy, the Department of Interior, and NASA, to work on cooperative projects in areas covering quantum physics, earthquake prediction, and climate change monitoring.

The basic foundation of this cooperation is, simply put, our educational and person-to-person exchanges.  Taiwan is the 6th- largest source of foreign students in the United States, with over 28,000 students from Taiwan currently in the U.S.

In a positive sign for the education-forged links between the U.S. and Taiwan, the National Science Council is working to promote increased partnerships between Taiwan and U.S. research institutes.

U.S.-Taiwan bilateral cooperation on global issues is already strong and covers a diverse range of issues.  Global challenges, however, show no sign of abating, and many of them pose problems on a scale never before seen in human history.

We must, therefore, continue to increase and strengthen our cooperation by expanding educational exchanges, collaborative research projects, and commercial linkages in areas that include green energy technologies.

We must also seek opportunities to expand our cooperation to the regional level and beyond.  As you’ve seen from many of the examples I’ve provided today, this is already happening.  But we must not be complacent.  We must constantly look for new and creative ways to share our experiences and knowledge with others.

Taiwan has much to offer the international community in addressing global issues, and the U.S. will continue to support Taiwan’s meaningful participation in international organizations such as the World Health Organization and the United Nations Framework Convention on Climate Change.

Meanwhile, the U.S. thanks Taiwan for many decades of successful bilateral cooperation on global issues.  We look forward to a long and bright future of continued cooperation and, I am confident, solutions to many of the most pressing issues of our times.